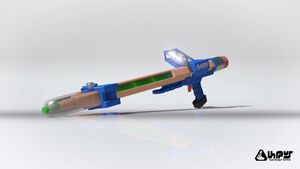 The Snipwriter 5H is a charger with the unique gimmick of having five shots with one full charge, at the cost of lower shot power. Its mobility lets the weapon play similarly to the Bamboozler 14 Mk I although with more range and higher ink consumption. Its kit however, does not enable the weapon's strengths.

The Snipewriter 5H's range allows the user to assume an anchor role, with the turf and chip damage also making way for a supportive playstyle.

The Sprinkler can be used in a variety of ways to help a Snipewriter 5H user:

Tacticooler can help the user and their team push in.

Like other, more conventional chargers, the Snipewriter 5H can provide support fire and help maintain spatial control, but its mobility allows its user to more easily either push forward with the rest of the team or retreat from an advancing opponent. Nevertheless, it can still be redundant to have one or two more long-ranged weapons on a team for a few reasons:[1]

Although the Snipewriter 5H is better at turfing than traditional chargers, it is still less efficient than other weapons, due to its high ink consumption and charge time. A Snipewriter 5H user will have to rely on their teammates to maintain map control. Not having enough turfing ability – usually from having too many blasters and chargers – presents its own set of problems:[1]

The Snipewriter 5H's lack of lethal bombs – particularly either Splat or Suction Bombs – generally necessitates its user's teammates to equip weapons that include them. Lethal bombs provide their user's team a couple of advantages over another team that has no lethal bombs in its composition:[1]

Snipewriters are an ink-hungry weapon. When equipped, Last-Ditch Effort grants 24 ability points of three different stackable abilities for the last 30 seconds, or when the ranked score is 50 or below. These abilities include:

Swim Speed Up helps boost swim speed of the user, allowing the user to get quickly to the frontlines, or escape sticky situations.

Due to not having a charge hold, running is the only way the user can move while having a charge. Being already mobile, Run Speed Up can boost the user's mobility, allowing the user to follow up to opponents.

Using Quick Super Jump allows Snipewriter users to more easily return and retreat to or from the battles.

Every player, including an Snipewriter user, is expected to come in contact with the opponent's ink on various surfaces, which can both be damaging and reduce mobility. Ink Resistance Up not only partially offsets the reduction in mobility but also delays the damage taken from contact with opposing ink:

With multiple shots that can hit opponents, it is possible that they can escape while being hit once. Thermal Ink can take advantage of this to allow the user to know where they are, preventing flanks from that opponent.

Not recommended. A Snipewriter 5H user will not be as safe and far back from enemy fire often, meaning it can get splatted more times than splatting others. Snipewriters also generally get assists more often than splats, which Respawn Punisher does not affect.