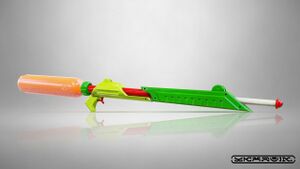 Damage Up increases the amount of damage per shot for uncharged, partially charged, and fully charged shots. Chargers, such as the Splat Charger, benefit the most from this ability by reducing the amount of time needed to charge a shot for it to be able to splat an opponent in one hit. 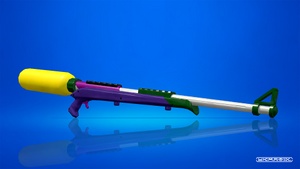 The Splat Charger – along with the Hero Charger Replica – is the first long-range weapon available to the player. In addition to being very different from both shooters and rollers in terms of range and turfing ability, chargers like the Splat Charger assume a different role within a team composition.

The Splat Charger is an anchor's weapon, meaning that it has a long range to influence a large portion of the stage and, thus, its user is usually best positioned behind their teammates to watch for and prevent the opponents' flanking attempts, provide support fire, and allow their teammates to safely Super Jump to them to quickly return to the front lines.

Already a versatile sub weapon with a variety of purposes, the Splat Bomb is the Splat Charger user's most reliable option in close- to medium-ranged combat:

The Splat Charger's long range and high damage allow it to provide support fire and help maintain maintain spatial control, despite its lack of turfing compared to most of the other weapons of a team's composition. Therefore, it is generally redundant to have more than one long-ranged weapon on a team for a few reasons:[7]

Because the Splat Charger is inefficient at turfing, its user will have to rely on their teammates to maintain map control. Not having enough turfing ability – usually from having too many blasters and chargers – presents its own set of problems:[7]

The Splat Charger needs to consume a large amount of ink (18% of the ink tank) to fully charge its shots. Ink Saver (Main) not only allows it to fire more fully charged shots per ink tank but also conserves ink for a possible Splat Bomb use, in case an opponent gets too close.

Main Power Up increases the damage output of all of the Splat Charger's shots – tap shots, partially charged shots, and fully charged shots – by up to 20%. While it cannot increase the damage of a non-fully charged shot to 100.0 (unlike Damage Up in Splatoon), there are other benefits to having extra damage, from reducing the charge time for a two-shot splat in close quarters to destroying most brella shields in one hit.

Quick Super Jump decreases both the "charge" time before and the travel time of a Super Jump, allowing its user to escape more quickly. A Splat Charger wielder is usually vulnerable in close quarters and would also have an incentive to maintain valuable special gauge progress for their Sting Ray.

Special Charge Up accelerates building up the special gauge for Sting Ray, which has a number of uses but is mostly used for objective control, especially for stopping or slowing the Tower or Rainmaker. Because of its very high special gauge requirement for Sting Ray (220p), a Splat Charger will require a large investment of ability points into Special Charge Up to even match the farming rate of other Sting Ray-based weapons, but it can be the difference between having Sting Ray available on defense and not having it. 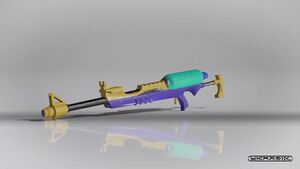