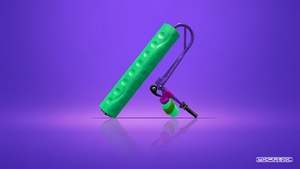 The Splat Roller – along with the Hero Roller Replica – is available very early in the game and the first available weapon in the roller class. Thanks to its one-hit-splat potential, it is capable of splatting opponents as easily as a Splattershot can. However, its shorter range, slower rate of attack, and dependence on teammates to turf requires its user to rely on a different playstyle than that of a typical Splattershot user.

While the Splat Roller is a slayer's weapon, it is used differently from other, more conventional slayer's weapons, such as a Splattershot or a Slosher.

New to Splatoon 2, the Curling Bomb adopts the sliding and ink trail-forming traits of the Seeker:

As a short-ranged slayer's weapon, the Splat Roller requires its user to be in close quarters with the opponent, who might be inclined to use bombs for zoning out the Splat Roller user. Ever since its introduction in Version 4.3.0, Bomb Defense Up DX will not only reduce the damage taken from opposing sub and special weapons that are not one-hit-splat but will also reduce the duration of the tracking effects of certain opponent's sub and special weapons, such as Point Sensors and Ink Mines, allowing the user of this ability to evade detection more easily.

Any good user of a short-ranged weapon like the Splat Roller is expected to come in contact with the opponent's ink on various surfaces, which can both be damaging and reduce mobility. Ink Resistance Up not only partially offsets the reduction in mobility but also delays the damage taken from contact with opposing ink.

Main Power Up increases damage for the Splat Roller, improving consistency when it comes to splatting.

As a short-ranged weapon that excels at flanking, the Splat Roller greatly benefits if it is able to swim faster. Swim Speed Up enables its user to more quickly close the distance towards an opponent, more quickly respond to an opponents' push, or even escape unfavorable situations.

Ninja Squid reduces detection by opponents while swimming on non-vertical surfaces. It allows its user to swim at full speed undetected at the cost of about 20% of the maximum swimming speed as of Version 3.0.0. Because a Splat Roller user has difficulty attacking most opponents head-on, Ninja Squid can make it easier for its user to shark and more safely approach opponents.

Not recommended. Due to the Splat Roller's sharking playstyle, it will spend a sizable amount of time swimming in ink - which refills the ink tank. Ink Saver (Sub) should be invested into instead.

Not recommended, as Splashdown is already 170p and not worth investing into. [7] 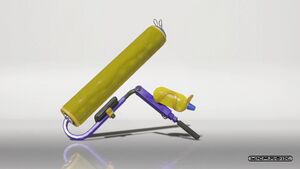