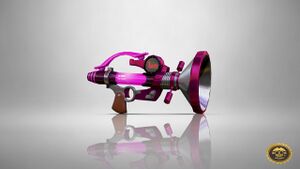 The Cold Blooded ability will reduce the amount of time the player is tracked by Echolocator and point sensors by 25%. This can help the player stay hidden while ambushing foes.

The Ninja Squid ability conceals any sign of swimming in ink on horizontal surfaces, allowing the users of shooters with shorter range to advance and ambush foes without being detected. 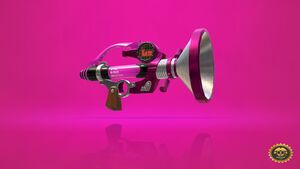 The Sploosh-o-matic 7 is a very mobile, rapid-firing, but very short-ranged weapon with a high rate of damage. Compared to the other two variants of the Sploosh-o-matic, it has a kit that is more versatile and better suited for its intended role.

While the Sploosh-o-matic 7 is a slayer's weapon, its lack of range and accuracy forces it to be played differently from how typical slayer's weapons are played:

The Splat Bomb, normally a versatile and complementary part of many slayer's weapon builds, has an even larger role for a Sploosh-o-matic 7 user:

The various characteristics of the Sploosh-o-matic 7 and its build make it most suitable for Rainmaker:[5]

The Sploosh-o-matic 7's rapid turfing and farmable Ultra Stamp means that a fellow slayer does not necessarily need to turf or build up their specials as often, freeing them to use other complementary weapons:

As a short-ranged slayer's weapon, the Sploosh-o-matic 7 requires its user to be in close quarters with the opponent, who might be inclined to use bombs for zoning out the Sploosh-o-matic 7 user. Bomb Defense Up DX will not only reduce the damage taken from opposing sub and special weapons that are not one-hit-splat but will also reduce the duration of the tracking effects of certain opponent's sub and special weapons, such as Point Sensors and Ink Mines, allowing the user of this ability to evade detection more easily.

Any good user of a short-ranged weapon like the Sploosh-o-matic 7 is expected to come in contact with the opponent's ink on various surfaces, which can both be damaging and reduce mobility. Ink Resistance Up not only partially offsets the reduction in mobility but also delays the damage taken from contact with opposing ink.

Ninja Squid reduces detection by opponents while swimming on non-vertical surfaces. It allows its user to swim at full speed undetected at the cost of about 20% of the maximum swimming speed. Because a Sploosh-o-matic 7 user has difficulty attacking most opponents head-on, Ninja Squid can make it easier for its user to shark and more safely approach opponents. Over 25% of sampled Sploosh-o-matic 7 players use this ability in Splat Zones and Tower Control, while it is uncommonly used in other modes.[7]

Object Shredder can not only help pop the Rainmaker shield more quickly but can also help more easily destroy opponents' Splash Walls, Ink Armor, and Ballers. Brella shields, however, are not affected by Object Shredder.[9] Over 60% of sampled Sploosh-o-matic 7 players use this ability in Rainmaker.[7]

Super Jumping to a teammate after respawning carries the risk of getting splatted upon landing, due to the appearance of a Super Jump indicator. When equipped, Stealth Jump better covers this indicator from long distance opponents, allowing its user to more safely return to the front lines and maintain pressure on the opponent. However, in Rainmaker, a Sploosh-o-matic 7 user will have to decide between the Shoe-specific abilities Object Shredder and Stealth Jump.