Logo for the project

Splatoon Stronghold is a project to create a "Stronghold for competitive Splatoon providing resources to longtimers and newcomers alike"[1]. Stronghold has released an announcement video for the project explaining what it was and why.[2]

The project utilises a Discord server for interaction, a Google document for sharing, and a website for searching. 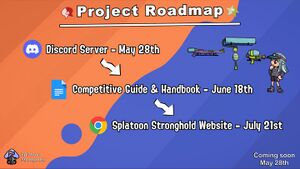 Inspired by a lack of accessibility to resources in the competitive scene, the founder of the project spoke with other players about their competitive journeys and how they learned information (nearly all of that information being learnt by experience and not through resources)[Citation needed].

The project went public on April 12th 2022[3], with the Discord server announced on April 26th and released publicly on May 28th to celebrate Splatoon's 7 year anniversary.[4] On June 9th, the Discord server became available on Discord's Server Discovery feature. [5]

The project's roadmap was released alongside the guide and handbook after, on June 18th and July 21st respectively. [6]

On June 18th, 2022, the project's second part in its three-phase plan was released with the announcement of the Splatoon Esports Guidebook[7].

Stronghold's Discord Server has a getting started in competitive guide found in the main channels[Citation needed]. There are sections devoted to listing resources, providing a captain forum, hosting weapon and game discussion channels, finding scrimmages, requesting VOD recordings, and looking for people to play the game with. Below the various sections are fully listed and explained

The Splatoon Esports Guidebook was created to help new players get started in the scene while also serving as a reference guide throughout their competitive journey whether that be competing in or contributing to the scene.

A website has been planned to help promote the competitive scene and give greater accessibility to resources of everyone.