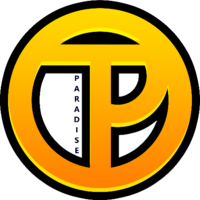 Team Paradise (tP), formerly known as Squid Squad Spades and Bittersweet.GG, was a competitive Splatoon team. They were in the Kid Conference of the EndGame Splatoon Premier League.

The team's former logo from when they were Squid Squad Spades.

The team's former logo from when they were Bittersweet.GG.

The former tP logo. This was the first iteration of the logo.

Originally, the team was formed as the Spades division of the former Squid Squad team.[1] After high placements in major tournaments throughout the summer, they parted ways with Squid Squad and were sponsored by Bittersweet.GG on October 6th, 2015.[2] On October 18th, 2015, the team decided to part ways with Bittersweet.GG due to management issues. As a result, the team changed their name once again, this time to Team Paradise.[3]

On April 2nd, 2016, many of their former members announced their departure from the team.[4][5][6][7] On April 3rd, 2016, former captain LSDJ officially announced his departure from Team Paradise as well as his temporary departure from competitive Splatoon.[8] The end result was the unavoidable disbandment of the team.