For information about the Torpedo, see Torpedo. 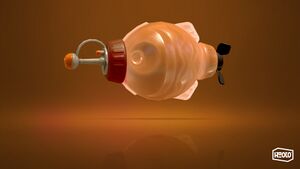 Introduced in the Version 4.2.0 update, the Torpedo is a unique sub weapon that has two phases, each with different applications. While it inflicts less damage than lethal bombs, its rolling phase can be combined with a shot from a main weapon, particularly the Kensa Rapid Blaster. The homing phase can be a noxious distraction tool against opponents.

If the Torpedo finds an opponent while airborne, it transitions into its homing phase before launching towards its target in a straight line:

Although less powerful than other bombs, a Torpedo can still damage or even destroy an opponent's brella shield, Splash Wall, or Baller or the Rainmaker shield, while detonating on contact.

While versatile, the Torpedo lacks the damage output to be a lethal bomb. Lethal bombs – particularly Splat or Suction Bombs – provide their user's team many advantages over another team that has no lethal bombs in its composition:[7]

The homing phase of the Torpedo makes it a great tool to check flanks and reveal any sharking opponents, reducing the likelihood of a surprise attack sabotaging your team:

The threat level of an opponent armed with Torpedoes can range from a constant annoyance to a lethal serial splatter, depending on their ability to combo rolled Torpedoes with their main weapon. The homing phase also gives them a means to catch you or your teammates flanking or sharking, making them harder to sneak up to. Because only four weapons – the Kensa Splattershot Jr., the Kensa Rapid Blaster, the Clear Dapple Dualies, and the Kensa Undercover Brella – have Torpedoes in their kits, remembering and recognizing them should not be too difficult.