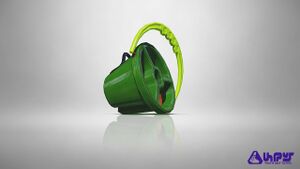 The Tri-Slosher functions similarly but with minor differences.

Disruptor while not as versatile as a bomb, can provide a Tri-Slosher user with many advantages.

Unless a Tri-Slosher user is on an extended splatting streak, they can expect to get splatted often. When equipped, Comeback grants 12 ability points of six different stackable abilities for twenty seconds after respawning from getting splatted by an opponent:

All of these abilities benefit a Tri-Slosher, making it more ink efficient, move faster, and pairs well with the weapon's middle special depletion to obtain Bubbler faster on respawn. 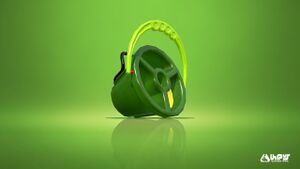 Compared to the original Slosher, the Tri-Slosher has a quicker, shorter-ranged attack that is thrown in three directions, allowing it to turf more thoroughly. It also has a more aggressive kit than that of both its other variant, the Tri-Slosher Nouveau, and the Slosher, encouraging its user to apply constant pressure onto their opponents.

The traits of the Tri-Slosher make it a quintessential slayer's weapon:

While the Tri-Slosher's Burst Bombs are versatile, they lack certain advantages offered by lethal bombs — particularly either Splat or Suction Bombs, which provide their user's team a couple advantages over another team that has no lethal bombs in its composition:[11]

Multiple Ink Armors used by the same team do not stack. Therefore, it would be redundant for a team to have more than two Ink Armor users.[11]

Ever since its introduction in Version 4.3.0, Bomb Defense Up DX will not only reduce the damage taken from opposing sub and special weapons that are not one-hit-splat but will also reduce the duration of the tracking effects of certain opponent's sub and special weapons, such as Point Sensors and Ink Mines, allowing the user of this ability to evade detection more easily. Because the Tri-Slosher is a powerful short-ranged weapon, its user can greatly benefit from reducing the damage taken from their opponents' bombs. Just three ability points, or one sub, offer plenty of utility:[12][13]

Unless a Tri-Slosher wielder is on an extended splatting streak, they can expect to get splatted often. When equipped, Comeback grants 10 ability points of six different stackable abilities for twenty seconds after respawning from getting splatted by an opponent:

The former three abilities and Swim Speed Up are particularly useful for the Tri-Slosher, allowing it to consume less ink and maintain pressure on the opponent upon returning from spawn.[12]

A Tri-Slosher user is expected to come in contact with the opponent's ink on various surfaces, which can both be damaging and reduce mobility. Ink Resistance Up not only partially offsets the reduction in mobility but also delays the damage taken from contact with opposing ink.[12][13]

Quick Super Jump decreases both the "charge" time before and the travel time of a Super Jump. Tri-Slosher users who include this ability will benefit since Quick Super Jump allows them to both return to the front lines more quickly and escape unfavorable situations more easily to preserve special gauge progress.[12][13]

A self-explanatory ability, Swim Speed Up enables an already mobile Tri-Slosher user to more rapidly close the distance towards an opponent, more quickly respond to an opponents' push, or even escape unfavorable situations.

Upon Splatoon 2's release, the Tri-Slosher gained infamy for being the defining slayer weapon. It had a Burst Bomb combo reminiscent of the standard Slosher in the first Splatoon and a cheap special gauge of 180p for Ink Armor, a special that was even stronger than it is currently due to it not having any knockback or damage bleed. Even after a major nerf in Version 1.1.2 that increased its special gauge to 210p, the weapon was still a strong pick with some teams running multiple Tri-Sloshers in their compositions.[16] However, version 1.3.0 nerfed the Tri-Slosher's damage output from 62 to 52, and its range, making it less likely to get a two-shot splat from higher elevations.[17] In addition, Ink Armor received nerfs that added bleedthrough damage and knockback when the armor breaks, in addition to a reduced invulnerability time. After these nerfs, the Tri-Slosher largely fell out of the competitive scene until the release of version 2.0.0, which brought the Tri-Slosher a handful of buffs, giving it 62 damage once again, increasing its movement speed while firing, and shrinking its special gauge from 210p to 190p. While the weapon did not rise to the top once again, it did manage to carve a niche on stages such as Blackbelly Skatepark, due to the stage favoring short-ranged weapons and having uneven terrain from which it could attack from safely.

The Tri-Slosher continued getting some quality-of-life buffs, such as becoming a lightweight weapon in 4.2.0 and removing the weapon's "deadzones" in 5.0.0, where opponents could be in front of the user and still not take any damage. Finally, in 5.2.0, the weapon received another buff where it would slosh two frames faster than it would before, slightly improving its time to splat an opponent. Throughout this time period, opinions on the weapon became more and more positive, from being perceived as low tier by competitive player Chara in 4.6.0[18] and 4.8.0[19] due to inconsistent hitboxes and lack of range, to being placed in the top tiers in his 5.3.0[20] and 5.5.0 tier lists, as the problems with the weapon he previously mentioned were fixed by that time. He even claimed that the vanilla Tri-Slosher had the potential to be the best slosher, as it could handle short-ranged shooters and special spam easily due to its high mobility. However, the weapon does need a team composition built around it and could struggle on stages that favor long range.