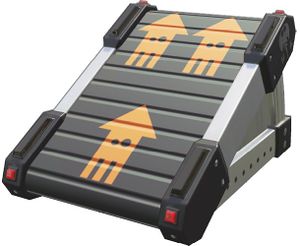 Dash tracks are a mechanic found in Octo Canyon and the Octo Expansion. Upon touching a dash track, the player is sent flying in the direction it points in, allowing them to cross large gaps or quickly clear obstacles. Bombs also follow dash tracks. They have also been used in a Shifty Station layout, The Maze Dasher. The player can move on the dash track as a humanoid or a squid or octopus.

Dash tracks resemble conveyor belts that are always in motion. They can be placed horizontally, vertically, or diagonally. They have pictures of squids on them, resembling arrows.

They also send the player, enemies, and most bombs flying towards the direction they are pointing at at a relatively fast speed, usually enough to cross a huge gap otherwise inaccessible. Sprinklers and Suction Bombs remain on and follow the dash panel, while Burst Bombs explode on impact. They also have the Ammo Knights logo on them.