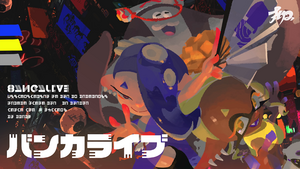 Promotional poster for the concert.

The Deep Cut Concert at Nintendo Live 2022, in Japan known as Bankalive, was a set of virtual live concerts that took place during Nintendo Live 2022 in Tokyo, Japan on 8 October 2022 and 9 October 2022. It was the first "live" appearance of Deep Cut, as well as the first virtual concert featuring characters from the series since the release of Splatoon 3. Deep Cut's performance was one part of a larger show, with the other half featuring DJ KK from the Animal Crossing series in a set titled "DJ KK Paradise Mix!!".

The performance starts at approximately 31:34.

Prior to the release of Splatoon 3, on 21 July 2022, Nintendo announced that the Nintendo Live 2022 event would be held at Tokyo Big Sight, Japan's largest convention center, for two consecutive days starting on 8 October 2022. Among the festivities confirmed were live music performances featuring music from Animal Crossing: New Horizons and Splatoon 3. On 1 September 2022, the Japanese title of the concert featuring Deep Cut was revealed.

On 7 October 2022, the day before the first concert, a short "behind the scenes" video was posted by @SplatoonNA on Twitter.[1] Later that day, @SplatoonJP posted a higher-quality copy of the video.

The combined concert, which featured "DJ KK Paradise Mix!!" and "Bankalive" segments, lasted an hour and was held six times throughout Nintendo Live 2022, with three performances per day in South Hall 3.[2] Day 1's performance at 04:30 UTC began with an introduction from Hisashi Nogami.[3] Day 2's final performance was live-streamed on YouTube and Niconico. On YouTube, the stream's archive remained public until a separate video with both segments was uploaded on 13 October 2022. The archive remains available on Niconico.

Other Splatoon-related activities at the event included the Splatoon 3 Start Dash Cup tournament (スプラトゥーン3 スタートダッシュ杯), which had a general division and an elementary school student division; the "Do the Jump, Slash, Splash, Gah" booth (ピョン・ズバ・バシャ・イヤーやってみよう！), where employees guide young players through their first time playing Splatoon 3 and other Nintendo games; and the Splatoon 3 Skill Challenge (スプラトゥーン3 ウデマエチャレンジ) where players who win two consecutive Turf War battles can win a Splatoon 3-themed notebook.

In an attempt to curb COVID-19 transmission, those interested in attending Nintendo Live 2022 were required to register in a lottery system for the event. The first registration period was for potential tournament competitors and lasted from 26 July 2022 until 15 August 2022. The second registration period was for general admission and lasted from 1 September 2022 until 15 September 2022, with 5,000 unique attendees able to attend per day (for a total of 10,000 attendees). General admission winners were assigned one of six staggered entry times as well as a seat in one of the three concerts being held on their designated day. Some concert seats were also reserved for tournament competitors.[4] To comply with local protocols, attendees were not allowed to scream, cheer, or stand up during the show.

Merchandise made for the event briefly went on sale on the Japanese My Nintendo store at the beginning of the second registration timeslot. In response to high demand, the remaining stock originally allocated to be sold at the venue was instead sold online exclusively to attendees who had won the admission lottery; stock for people not attending the event would be produced and delivered afterward. Orders open to the general public opened on 4 October 2022 and closed on 11 October 2022, with initial orders set to be delivered around November 2022 and the rest around January 2023.

After the first chorus:

During the B-Part of the song, where Shiver and Frye sing along with Big Man in his solo:

During the final portion of the song:

After the first chorus: