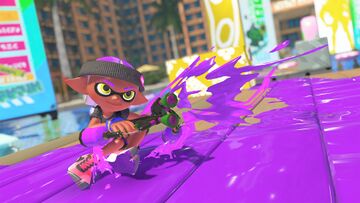 A promotional image for Splatoon 3 featuring an Inkling wielding the Splat Dualies, a weapon included in the Dualie class.

Dualies are one of the main weapon types in the Splatoon series. They were first introduced in Splatoon 2. Dualies are dual-wielded guns that fire small blobs of ink in quick succession. Weapons of this type have the unique capability to perform a dodge roll move with a burst of ink using

, allowing for both defensive and offensive maneuvers, even in enemy ink.

Dualies fire alternatingly from each gun. Usually, each gun fires at two separate crosshairs on the screen, giving them lower accuracy, but after a dodge roll the player enters a state where they hold the dualies together, and the crosshairs converge into a single one for more accuracy, and usually an increased fire rate. This state lasts until the player moves or stops firing. Usually, after a dodge roll the player cannot move for a brief amount of time, though they can dodge roll again up to a maximum amount of successive rolls, which is usually 2. Dodge rolls consume ink and leave a splatter of ink on the ground, and their properties vary between weapons.