Easter eggs are secrets in video games as a means of unexpected entertainment or a bonus.

The following is a list of Easter eggs in the Splatoon series.

The albums of multiple artists have a black and white logo usually located on the bottom left corner, which resembles and might be the in-universe Parental Advisory label.

After some boss battles, if a player stands at the launchpad long enough without getting on, a sound file containing many mysterious and disturbing noises, including steel banging and assorted, distorted screams, will begin playing. Splatoon's director, Tsubasa Sakaguchi, was not aware of these disturbing noises until an interviewer brought it to his attention.[1]

The mysterious noise will not occur after defeating The Ravenous Octomaw! in Area 4 in Splatoon. These sounds still play in the amiibo boss battle challenges. The sounds return in Splatoon 2. However, they only occur in one boss battle in Fear the Octo Samurai and even can be heard if waiting before the battle.

The Great Zapfish emerging out of the water near a jellyfish on a raft.

While playing on Piranha Pit, the Great Zapfish appears briefly out of the water on the far, lower west part of the map. If a player waits until there is one minute left, they will likely see the Great Zapfish. An E-liter 3K Scope is recommended for this to get a closer view when zooming in.

An Inkling scoring a hoop with a Splat Bomb

On the Shooting Range that can be accessed by pressing

on the Equipment screen or whilst in Ammo Knights, there is a basketball hoop. If the player tosses a Splat Bomb into the hoop, their Inkling will say a celebration phrase, much like they would if they were to splat an opponent or signal. A green sparkling effect will also occur around the hoop. 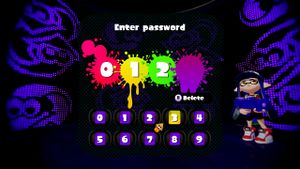 Each number on the password entry screen for Private Battles plays a specific tone when the cursor is moved to it. The corresponding notes and numbers are listed below:

These tones are not arranged in order or in a scale, as one would think, but are a bit more arbitrarily placed. It is possible to play the intro to the Calamari Inkantation by moving the cursor between numbers in a specific pattern, which might explain the way the notes are arranged. 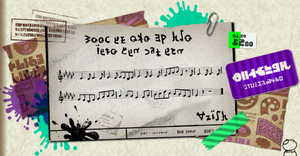 The pattern is as follows, each row corresponding to a bar of Calamari Inkantation.

Each Sunken Scroll has a doodle of a character on the bottom-right corner. By quickly moving through the pages, one can see a flipbook-like animation showing the character spin around twice and turn into a different one. It starts as a Zapfish, then changes into Judd, and finally into Sheldon.

The Squid Sisters, waving at the player

To the left of the Battle Dojo in the elevated walkway to the right of Inkopolis Plaza, there is a studio where the Squid Sisters can be seen chatting. By staying near the window and using the first-person view with

on them, the two will eventually wave at the player. Similar is true with Off the Hook in Splatoon 2 (with Marina waving to the player and Pearl glancing briefly before doing a gesture if the player is an Inkling, and Pearl and Marina becoming surprised as the player (like they thought the player was Agent 8) if they were Octoling) and Deep Cut in Splatoon 3 (with the waving animations being changed after the player beats the story mode campaign). 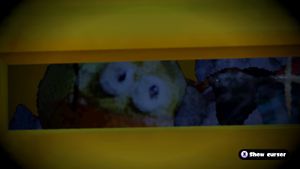 The stuffed Zapfish found in the dumpster.

There is a stuffed Zapfish in the open dumpster behind Cap'n Cuttlefish's manhole in Inkopolis Plaza. Stuffed Zapfishes are used when the real Zapfish for each level has already been collected by Agent 3.

When the player randomizes their gear, a sound effect plays. If this is slowed down to 50% of its original speed, it sounds similar to the Nintendo Gamecube startup sound.

Pressing various buttons and moving the joysticks on the Joy-Con or the Switch Pro Controller activates various sound effects that change the Lobby music in various ways.

Sounds coming out of Squid Beakon

When standing next to a Beakon, Inkling voice clips can be heard. This is often difficult to notice in Multiplayer matches, so to hear the voice clips clearly, Recon is a reliable alternative.

These voice clips are distorted versions of the Inkling voice clips that come from players.

Off the Hook wave 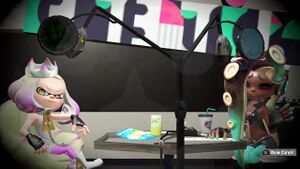 Off the Hook, waving at the player if they are an Inkling. 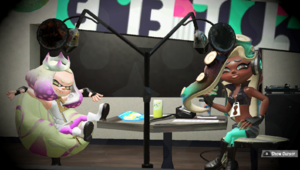 Off the Hook, waving at the player if they are an Octoling.

To the right of Inkopolis Square, Off the Hook can be found in their studio where they record the news. Using the first-person view with

allows one to zoom in on them to trigger this reaction. Marina notices the player first and waves, while Pearl will notice a few seconds later and glare at the player before striking a pose. This mirrors the Squid Sisters' wave in the first game. If playing as an Octoling, Pearl and Marina will act more favorable towards the player, recognizing them as Agent 8.

In the new Shooting Range, there is a windowed room that contains two unexploded Suction Bombs, a Splat Bomb with no ink filled, a disassembled E-liter 3K (which is not otherwise available in the game) and a Splat Roller with the first game's design. This could possibly reference the Splat Roller seen in the first game's Shooting Range. There are also a pair of Purple Sea Slugs and a hat on the right side of the wall.

Splatting all three moving Squid Bumpers at the same time in the left part of the room will cause the player to say a celebration phrase, much like they would if they were to splat an opponent or signal. This mirrors the Easter egg in the first game. Using a Splashdown with the right timing is one way to perform this task.[2]

In the back right part of Inkopolis Square, past the Crust Bucket, one can see Inkopolis Tower from the first game. This appears to be a reference to how Inkopolis Tower could be seen in the background of various stages and Octo Valley.

By going to Murch in Inkopolis Square, the player can hear sound effects of Squid Jump coming from his phone - a minigame from the first game. However, moving the camera shows the phone screen is blank. This is likely an oversight.

In every Octo Canyon music track that plays in normal levels (aside from returning ones), if played backwards, Callie can be heard singing one of the Squid Sisters' songs. Maritime Memory is heard in Shooting Starfish, City of Color in Octo Eight-Step, Ink Me Up in The Girl from Inkopolis, and their version of Now or Never! in Buoyant Boogie. This signifies Callie being mind-controlled by the Octarians, and collaborating with Turquoise October under DJ Octavio's control.

The Shoal and the Crust Bucket both feature stickers that resemble the real-life American Express and Visa symbols. The Shoal also has a sticker resembling Mastercard. Above the Grizzco Industries building are two posters parodying the real-life musicals The Phantom of the Opera and Wicked. A poster promoting the new Wet Floor album resembling the real-life Tower Records can be seen above the Galleria. In real life, Tower Records promoted Splatoon 2 merchandise and sold a Wet Floor CD.

To the left of the main Lobby, Spyke from the first game can be seen in a café using a laptop. He is unable to be interacted with in any way. He is also seen during Splatfest, although the only change is that he stares at the players dancing in the Square and does not use his laptop.

In Headspace, the Legendary Cap (now known as the Cap of Legend) from the first game can be seen in the background. Interestingly, this cap cannot be purchased from Headspace in Splatoon 2 and must be unlocked through Salmon Run.

Deep Cut waving at the player

Similarly to in the previous games, if the player visits the Anarchy Splatcast studio in Splatsville and zooms in on Deep Cut from outside, they can be seen chatting. If they are looked at for long enough, they stop talking, notice the player, and smile and wave at them. After the story mode campaign has been completed, Deep Cut's waving animations change.

Splatoon and Splatoon 2 feature references from other Nintendo games, such as sprites of a Blooper from the Super Mario series and an Octorok from The Legend of Zelda series, with the former being squid-like and the latter being similar to an octopus. Another reference is that the art for Squid Jump resembles the Famicom boxart for Super Mario Bros.