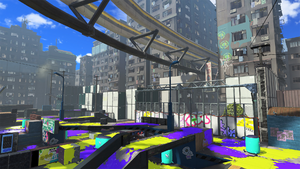 Eeltail Alley is a multiplayer stage in Splatoon 3.

Eeltail Alley is set in an alley in the middle of Splatsville. Various bridges placed around the stage give it a separate upper and lower layer. There are many sponges spread across the map.