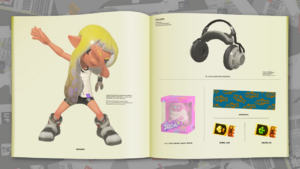 The Double-Cross Dab emote shown in the catalog.

Emotes are animations performed by the player character when winning a battle or clearing a Salmon Run shift in Splatoon 3. Most of them are obtained through the catalog at Hotlantis.

The player starts with the emote Flip Out. It changes depending on the current weapon type the player is holding, making up a total of eleven variations.

These emotes can be unlocked in-game anytime under certain conditions.

Catalogs change with each season and feature emotes the player can unlock as rewards for leveling it up and speaking to Harmony afterwards.

Drizzle Season 2022 is the first season in Splatoon 3 and features six emotes. 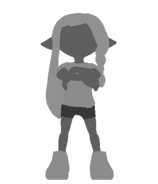 The icon of the unobtainable Win TriCol emote.

There are two special emotes performed under certain conditions during a Splatfest. The first emote, named Win TriCol, is performed after a Tricolor Turf War, when the attacking team wins: the winners who covered the most turf perform their chosen emote, while the other attacking team nods with crossed arms.

The second emote is performed when a team wins a 100x or 333x Battle. The animation starts with the players doing a little dance before pointing a finger up in the air (at which point the tip of it shines briefly); the whole team then looks at each other, and it ends with every member striking a different pose.

Emote names in other languages