This article is about the mission. For the character of the same name, see Octo Samurai.

Fear the Octo Samurai
˜ The Showdown ˜​

Fear the Octo Samurai
˜ The Showdown ˜ The Boss Kettle for this mission can be found directly in the middle of Suction-Cup Lookout, under the kettle for mission #8 Spinning Campground.

The player begins the level by Super Jumping to a circular arena with guard rails running along with parts of the edges. Once the player lands, a tentacle will rise out of a puddle of its ink, grabbing the Zapfish, which launches The Octo Samurai into its intro, rising out of its magenta-colored ink. The player has to damage the Octo Samurai by covering it with ink while dodging various attacks done by its roller. The whole body is vulnerable, except its back which is covered by a metal seat. Once enough damage is dealt, the Octo Samurai explodes in ink, similar to being splatted, leaving behind the belt. The belt seems to be a base for respawning. It contains some octarian ink in it and after a while, the ghost of Octo Samurai enters the ink and exposes a large tentacle in the base, pushing the player away if they are too close. The player then has to destroy the tentacle, which then makes the player super-jump back to the starting position, which then the Octo Samurai respawns at the base left behind. The player has to repeat this process three times, each time it increasing in difficulty. Once the tentacle has been destroyed three times, the Octocycle explodes, and the Octo Samurai is no longer able to respawn at the base, which then explodes in ink. This allows the player to rescue the Zapfish grabbed by The Octo Samurai’s tentacle at the start.

The Octo Samurai resembles an Octoling but much larger in size and more masculine and fat. The Octo Samurai has a heavyweight and round body that is similar to as a sumo wrestler, has small eyes, and sports a tentacle on the back of his head in a ponytail. He wears a black leather motorcycle jacket with golden embroidery on the sides and a print of DJ Octavio on the back. He carries a weapon that is similar to a Dynamo Roller that can change positions vertically or horizontally to the handle, and can combine with his unicycle to form a vehicle which Sheldon calls "The Octocycle".

To defeat the Octo Samurai, you must splat it to make it drop its Dynamo Roller and its belt on the ground. All areas except the back are vulnerable. The roller grows into a larger form and a tentacle pops out of the belt left behind. Attack the tentacle 3 times to defeat the boss.

The boss will similarly fling its Roller to Inklings but has a very wide range. The Samurai can also get on top of his weapon and charge towards the player, leaving behind a wide trail of ink. If he gets a direct hit, it's an instant Splat. The boss takes a break every time he does this, letting the player get in free hits. He always does a backward jump before doing his charge attack.

The Octo Samurai's roller is upgraded

The Octo Samurai does everything he does from phase 1, but he has two new attacks: 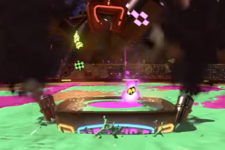 The Octo Samurai unable to respawn

Most of his attacks get more vicious, and he has a new one:

After defeating the boss for the first time:

After defeating the boss for the first time: