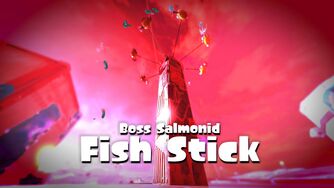 Fish Sticks are Boss Salmonids that appear in Salmon Run Next Wave in Splatoon 3.

A Fish Stick is a tall, tower-like pillar that is carried by a flying group of Smallfry.

The flying Smallfry will fly inland, from where they spawns in the air by the shoreline, and will place the small tower on the ground via a drill on the bottom of the tower. After planting the pillar, the Smallfry fly in a circle and slowly rain down ink to cover the surrounding area. A Fish Stick can defeated by splatting the Smallfry above it, either by using nearby high ground or by taking advantage of the blind spot directly around the pillar to ink it and climb up. Once all the Smallfry have been splatted, the Fish Stick will drop three Golden Eggs on the top of the pillar. If the Smallfry are splatted before they can plant their pillar, the pillar is destroyed; otherwise, it remains where it was placed until the end of the wave and can be used as high ground against other Salmonids.

The following text is quoted from the Salmonid Field Guide.[2]

Splatting Fish Sticks a specific number of times in Salmon Run: Next Wave will reward the player with special badges that they can use on their Splashtag.