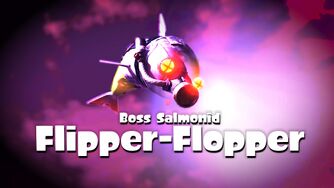 Not to be confused with the Flipper Floppers.

Flipper-Floppers are Boss Salmonids that appear in Salmon Run Next Wave in Splatoon 3.

The Flipper-Flopper is an armored Salmonid that resembles a dolphin. It attacks by throwing a ring of ink into the air, targeting a nearby player. Once the ring lands on the ground, it completely inks the ground it covers and the Flipper-Flopper will hover directly above it; after a short delay, it will dive into the circled area, instantly splatting any player that cannot escape in time.

Players can attack a Flipper-Flopper at any time while it is not submerged, though it has a large amount of health - comparable to that of a Big Shot. However, if they paint over a Flipper-Flopper's ring before it can perform its usual dive attack, it will crash into the ground. (As with Splat Zones, players' ink will immediately fill the ring's area after covering enough of it.) This leaves it flopping helplessly on the ground for a while as well as breaking its armor, which greatly reduces its health. Flipper-Floppers can dive back into their ink if not defeated while helpless, but they retain any damage dealt to them, making them easily splatted by follow-up attacks.

The following text is quoted from the Salmonid Field Guide.[2]

Splatting Flipper-Floppers a specific number of times in Salmon Run: Next Wave will reward the player with special badges that they can use on their Splashtag.

The "Flipper" part of its namesake comes from both a part of dolphin anatomy, and could also come from the titular bottlenose dolphin of the film and TV series Flipper.