Floating Sponge Garden
Soak It Up!​

Floating Sponge Garden
Soak It Up! Floating Sponge Garden is the fifth mission in Splatoon's single-player mode, Octo Valley. It is named as such because of its heavy use of sponges.

After the player clears The Mighty Octostomp!, they gain access to Area 2 via an Inkrail. To access this level, walk up into a large crater on the ground and shoot the invisible kettle to enter.

Jump down and ink the sponge until it is as large as possible and then swim up it. There are two Octopods, so shoot them and ink another sponge, then swim up.

There are two Octotroopers behind a wall. Shoot them to reach a checkpoint. 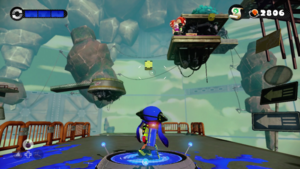 Ink the sponge and swim up it to see another sponge to swim up. However, this time, an Octotrooper is waiting on a platform above. When it turns around, swim up and shoot it and a box containing Power Eggs, then continue up two more sponges and use the launchpad. 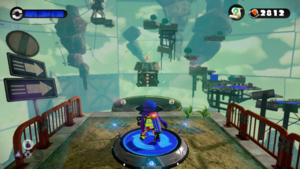 Jump down and ink the ramp for some more Power Eggs and swim through the fence to see two Octoballs. Simply ink the ground in front of them so they end up stuck in your ink, then shoot them to splat them. Swim up another sponge and ink a vertical wall with more Power Eggs, swimming up it to progress. 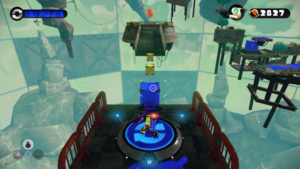 There are three sponges in a line, then three more Octoballs. Use the same method as before to dispose of them. Shoot down a balloon with more Eggs and use the launchpad that only appears after all three Octoballs are gone. 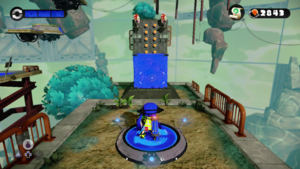 Either dispose of the two Octopods or quickly swim up the sponge before they can shrink it. There is another inkable vertical wall that is being guarded by two more Octotroopers. Either shoot them first or shoot the wall and go past them to reach another launchpad. 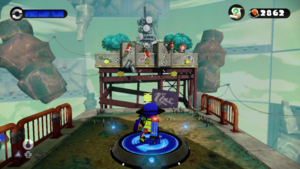 There are six sponges in front of you and three Octocopters. You will want to ink each sponge . Once you get to the second row of two sponges, one of the Octocopters will take notice of you and come closer. Splat it as soon as possible. By then, the other two will probably have noticed you, so take them out as well. When you reach the third row with three sponges, there are two walls with an Octotrooper strolling behind them. Spray an area that it is not looking at, jump over, and take it out. Shoot and swim up the ramp with more Power Eggs. 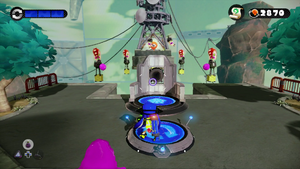 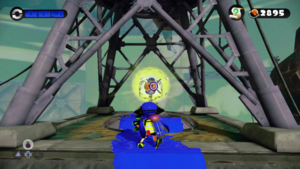 There is an Ink Cannon to swim into and five sponges nearby, four of which have Octotroopers on them and two Octocopters, so shoot to your heart's content. Once all the enemies are gone and each block is large enough, ink the floor beneath you near one of the blocks and swim over all of them until you reach the Zapfish. 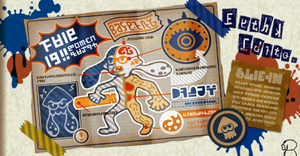 Location: At the fourth checkpoint, under the already inflated sponge. Let the two Octopods hit it, or alternatively, let the Octotroopers ahead shoot it. After it deflates, drop through the net and get the Scroll. 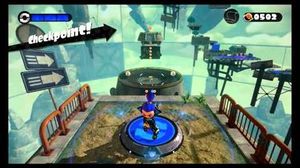 In one of the trailers showing off Splatoon's single-player mode, a slightly different version of this level was shown to audiences.