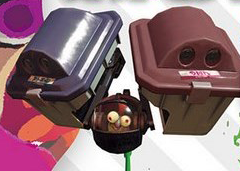 Flyfish are Boss Salmonids that appear in Salmon Run and Salmon Run Next Wave.

They consist of a single Smallfry piloting an Inkjet-like contraption to fly around. Flyfish will stop to open their two launchers and fire a barrage of up to eight missiles; similar to the Tenta Missiles, these can lock on to up to two players at a time. A direct hit from a missile results in an instant splat. A Flyfish has two launchers that fire the missiles. Players need to throw a Splat Bomb into each launcher (or by other alternatives shown in Statistics) while the lids are open and the missiles are firing. Once the missile launchers are destroyed, the Flyfish drops its Golden Eggs.

Splatting Flyfish a specific number of times in Salmon Run: Next Wave will reward the player with special badges that they can use on their Splashtag.

"Flyfish" comes from the fact that they hover, and also from flying fish, which can glide using their pectoral fins.