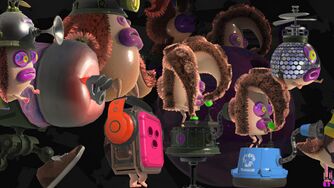 Fuzzy Octarians are Octarians that appear to be affected by Fuzzy Ooze. They resemble ordinary Octarians, but have fur and different eyes. They are featured as the main enemies of Return of the Mammalians in Splatoon 3, appearing in missions in the Crater and Alterna.

Fuzzy Octarians have different visual traits from normal Octarians: their normally red parts, such as the back side of Octotroopers, are covered in brown fur colored similarly to a grizzly bear's. Their usually beige parts, such as their fronts and legs, are now a very light shade of brown, and their eyes resemble the non-furry parts of Fuzzy Ooze with yellow irises and black pupils. Their lips and purple rings around their eyes are unchanged. They no longer wear shoes, showing four-toed feet.

Fuzzy Octolings have the same changes as other Octarians, with the red parts of their hair having reddish-brown fur and the normally beige side being light brown. In addition, they have browner skin than their hairless congeners, and their lips are purple. Their clothing has also changed, consisting of new goggles with Fuzzy Ooze appearing to cover the lenses, a leopard top, new legwear, and boots styled after sea mines.

The Fuzzy Octarians' ink is a similar color to Fuzzy Ooze, but it does not have the same fuzzifying properties and damages the player like normal instead.

The following Octarian types have Fuzzy variations. Types denoted with an asterisk have only appeared in their fuzzy form.