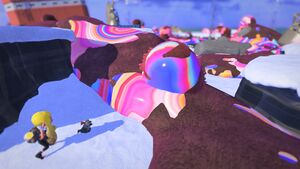 Fuzzy Ooze and a Fuzzball

Fuzzy Ooze is a mysterious substance found in The Crater and Alterna.

Fuzzy Ooze pulsates like a life-form, but is not a living creature. It is covered with a brown furry substance, which may have a connection with the hairy Octarians. There are Fuzzballs on Fuzzy Ooze splotches, which can be cleaned and eaten by Smallfry. According to log.exe, it was created by Mr. Grizz with liquid crystals found in the remains of Alterna, Golden Eggs, and his own fur.

If an Inkling or Octoling comes into contact with Fuzzy Ooze, some manner of brown hairy fur-like substance grows all over their body, and they lose their sense of self. In this state, they are unable to do much but hopelessly roll around and respawn after a few seconds. However, Salmonids like Smallfry are unaffected by Fuzzy Ooze, and can clean it up by eating it. The player needs to grab Smallfry and throw it at a Fuzzball, at the cost of Power Eggs. This will clean up the Fuzzy Ooze.