From Inkipedia, the Splatoon wiki
(Redirected from GamePad)
Jump to navigation Jump to search 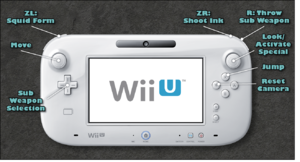 The Wii U GamePad.

The Wii U GamePad is the main controller of the Wii U and the only controller usable in Splatoon in all game modes except for Battle Dojo. It is often denoted by the symbol

The Wii U GamePad has the same button layout as the majority of Nintendo's consoles, as well as two control sticks, a D-pad, a touch screen and a microphone. The Wii U GamePad is also the main controller in Splatoon, allowing players to use motion sensors and the

sticks to aim, and the touch screen to view a live representation of the current playing field. Tapping allies' icons on the Wii U GamePad's touch screen allows players to Super Jump to them. 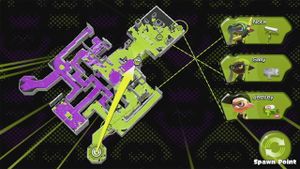 The stage map on

's screen during a battle.

While in Inkopolis Plaza, a shop, or the Battle Lobby, the Wii U GamePad displays content from one of four tabs, located on the right side of the screen: Map, Gear, Stages, and Options with a fifth option of an Ability Guide available from the Gear selection.

The Wii U GamePad when Map is selected.

The Map selection displays an overhead map of Inkopolis Plaza, with large icons denoting important locations. In the top left of the screen is a button that says "Lobby". When this button is tapped, the player is taken to the Battle Lobby. Similarly, an Octo Valley icon is displayed on the right, a Battle Dojo icon near the bottom right, and a Plaza icon that leads to Inkopolis Plaza in the bottom center. To the left is the Booyah Base, with icons for Weapons, Headgear, Clothing, and Shoes that takes the player to the respective shops. There are also four small icons showing where the Miiverse post box, Spyke, Arcade Machine and Amiibo box is, however these icons do not transport the player to the chosen area. A button in the bottom left takes the player to the Equipment screen.

The Wii U GamePad when Gear is selected.

The Wii U GamePad when Gear and Abilities are selected.

The Ability Guide displays icons of all the Abilities in the game, and pressing an ability displays at the top what that ability does. It can only be accessed at the bottom of the Gear selection, which is called Equipped Gear.

The Wii U GamePad when Stages is selected.

The Stages selection shows all the current stages in Regular Battle and Ranked Battle and the mode.

The Options selection allows the player to change settings.

Sunken Scroll 26, depicting the remains of a human playing a Wii U.