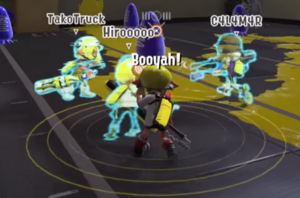 Ghosts are a feature of Splatoon 3's Battle Lobby. The player's online friends and current teammates appear as flat, hologram-like ghosts in the Battle Lobby, the Grizzco Industries building, and The Shoal.

By default, ghost players stand idly in areas to the side of the lobby's Test Range, with open rooms and recent activity displayed when the player approaches them. The player can press to talk to a ghost and join their lobby. Players are able to send out an invite to appear as a ghost to others by holding while creating a room for a selected game mode.

In addition, the player's current teammates walk around the lobby as ghosts in real-time. These ghosts may be seen using weapons and inking in the test range, but this has no physical effect on the player's own test range. If a ghost uses signals, the animation can be seen by others but the text does not appear.