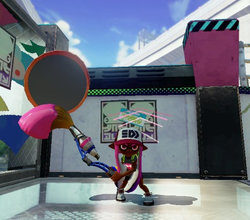 A female Inkling standing on glass in Urchin Underpass, which makes heavy use of the glass terrain.

Glass is a semi-common, un-inkable terrain feature in the Splatoon series.

Glass is a clear, ink-resistant surface; ink that hits it instantly dissolves away. Since Inklings and Octolings cannot swim over it, it is more efficient to run across in humanoid form. Glass is also slightly transparent, so the player can look at what is under it.

Glass can be found on the walls and floors of several stages - Urchin Underpass has both platforms and walls made of glass in its side alleys. It sees a minor use in some other stages, including Arowana Mall, Camp Triggerfish and Port Mackerel.

Glass also appears during the final stage of The Rampaging Octowhirl!, the third boss battle in Octo Valley. Some of the rotating floor is destroyed, making it harder for Agent 3 to get the Octowhirl caught in their ink. It is also used in some other missions, such as Propeller Lift Fortress.

Glass appears in the returning stages from Splatoon, while making new appearances. It functions the same as in the previous game. Shellendorf Institute prominently features glass, as there is a raised glass roof on top of the central area. Goby Arena also has some glass at the start of the lower area of the stage. Wahoo World has glass walkways near the center carousel which is also contained in glass.

There are also multiple Shifty Stations that uses glass:

Glass is also used by the Octarians. The window on the Octoseeker is made of glass and thus uninkable.