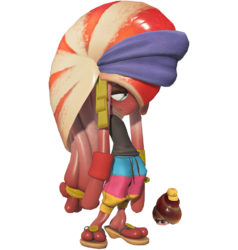 Gnarly Eddy is a character in Splatoon 3 who runs the headgear shop in Splatsville, Naut Couture, alongside Nails. He is a laid-back nautilus, his personality contrasting with the energetic Nails.

Gnarly Eddy's shell is off-white with tangerine stripes. He has multiple reddish cirri which make up the rest of his body: two serve as his arms, six function as his legs and are long enough to mimic a torso, and several others are bundled behind him and reach almost down to the floor, mimicking tied dreadlocks.

On the six cirri that mimic a torso, Eddy wears a grey tube top and a pair of striped shorts colored sky blue, magenta, and yellow. On the ends of those cirri he wears apricot-colored flip-flops. He has an indigo bandana tied around his shell and wears a red cuff on his right cirri-arm and a yellow one on his left, a golden ring, and three golden tassel earrings on either side of his face.

"Gnarly" is a slang word meaning "excellent," popularized by surfers. "Eddy" has two water-related definitions: either a whirlpool, or a smaller current running against a larger one.