Goldies are shimmering golden Salmonids wearing shiny togas and jewelry that move faster, hit harder, and have higher health than Chums. They have unique swirl-patterned scales and bright eyes sporting unusual "tired" pupils. In Splatoon 2 they wield frying pans as weapons, as do most Lesser Salmonids.

In Fog waves Goldies are hidden among other Salmonids and as of Version 3.2.0, have a chance to drop either one, five, or ten Golden Eggs instead of three after defeating it. Goldies are the only Boss Salmonids that will not have a Boss Salmonid alert when they arrive during Fog waves, but they make a unique eerie screeching sound and have a bright glow that can be seen from a good distance.

During Goldie Seeking, they are the only Boss Salmonid to appear. The aim of the occurrence is to attempt to find the Goldie hiding in the Gushers. When found, the Goldie will attempt to run away on set paths. Given enough time, they will head towards another Gusher and dive into the underground waterways, and the next Gusher they will appear in is randomized. This is the only occurrence where the Goldie will get smaller and grow progressively faster as it loses health. Mr. Grizz refers to them as 'the Gold One' and 'that sneaky Goldie' during Goldie Seeking waves.

During Rush, Goldies are the only Boss Salmonid and will pursue the player surrounded with Glowflies. During this occurrence, they drop three Golden Eggs, however, these Eggs drop scattered around where the Goldie was killed, instead of dropping in a cluster as with other Boss Salmonids' Eggs, making players' collection of them challenging. 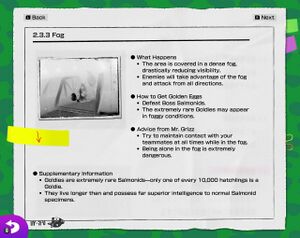 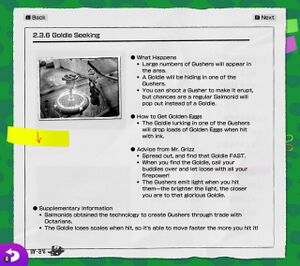 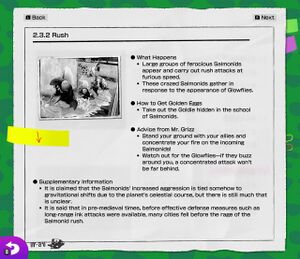