The Grizzco Charger is a Salmon Run and Salmon Run Next Wave rare weapon in Splatoon 2 and Splatoon 3. It appears to be an illegally modified Bamboozler 14 Mk I.

The Grizzco Charger is an instant-charging Charger weapon with powerful shots and an extremely long range (the same as the E-liter 4K). The weapon's charge speed is instantaneous and the damage it deals is higher than the Bamboozler but is still lower than other chargers; it is unable to burst a Steelhead's bomb in one shot. Movement speed while charging is 20% higher than that of the Bamboozler. Its ink consumption is between the Goo Tuber's and the Splat Charger's, consuming 13% of the player's ink tank per shot.

The Grizzco Charger is similar in appearance to the Bamboozler 14 Mk I. However, the Grizzco Charger is colored dark brown, reinforced by some metal parts, and have four yellow pill bottles with white caps sticking out of the main body. It is also modified to resemble a bicycle pump: the bamboo handle is replaced by a black metal one, the front sight is replaced by an iron rectangular frame pump base, and there is a black pump base under the muzzle, coming out of which are a metal tube bearing the Grizzco logo and a red hose that hangs near the handle. 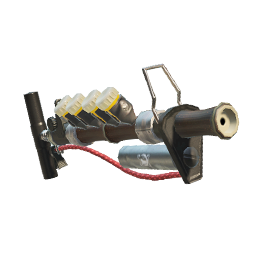 The Grizzco Charger is a rare weapon only available during Salmon Run wildcard rotations. It was first available on 29 April 2018 at 00:00 UTC

The Grizzco Charger was available during the following wildcard rotations:

The weapon is a charger that was modified by Grizzco.