Gusher Gauntlet
Take to the Skies!​

Gusher Gauntlet
Take to the Skies! Gusher Gauntlet is the fourth mission in Splatoon's single-player mode, Octo Valley. It is the first mission of Area 2, coming directly after the first boss, The Mighty Octostomp!. It is also the first mission to include Octostamps, and is named for the use of many gushers throughout the mission.

The kettle leading to Gusher Gauntlet.

The kettle for this mission is in the far right corner of the zone, on top of a platform.

button. If possible, splat the Octopod from a distance before it can hurt you. Dash Jump onto the circular platform and spray the red, circular knob which will erupt into a Gusher. Swim into this flowing pillar of ink with

and rise to its surface. Jump forward into the long, grassy platform and take out the two Octopods waiting to greet you. Collect the Power Eggs and continue to the next checkpoint.

Walk forward and activate the launchpad with

. You will land on top of a pillar in the center of a triangular platform and will immediately be assaulted by two Twintacle Octotroopers and an Octotrooper. Jump off of the pillar quickly and activate the nearest Gusher. Rise to the top of it in squid form, and take out the surrounding Octotroopers from this vantage point. Maneuver around the platform, using the three Gushers to destroy the Octarian enemies and the crates they are perched on. Make sure to collect the Power Egg hidden in each balloon above the Gushers as well.

After defeating the three Octarians, activate the nearest Gusher, rise to its surface, and jump onto the central pillar to reach the newly-activated launchpad.

Walk forward and destroy the four crates just in front of the next ledge. An Octostamp will immediately jump down onto the platform you are standing on, so move out of the way and spray ink at its fleshy back while it momentarily struggles face-down. Spray ink on the wall and swim up it to reach the next area.

The moment you arrive on the higher platform, two Octostamps will assault you from ledges. Closely watch their shadows so you can avoid their deadly impact. Take them out by spraying ink on their backs. Move forward, spray ink on the ramp, and swim up it.

Move forward along the platform until you drop off into the playing field below. This area is littered with unactivated Gushers and guarded by five Twintacle Octotroopers which will immediately begin chasing you. Activate the Gauntlets and travel up and down them to avoid Octarian fire, spraying ink at them along the way. Once you have defeated the last Twintacle Octotrooper, ink a path up one of the curved walls and swim up it to reach the next launchpad.

Walk forward and activate the first Gusher you encounter. Travel up this Gusher to the net platform above. Make sure you do not use squid form while on one of these nets as you will fall through to the platform below.

Optionally, turn right and take out the two Octopods guarding the Gusher. Activate this Gusher and travel up it, defeating the Octarian enemies at the top and destroying the few crates to collect some Power Eggs. Turn into a squid on this net platform to fall through to the platform below. Walk back to the Gusher you initially used and choose the left path this time. Splat the two Octopods near that Gusher, activate it, and ride it to the top.

Turn left, destroy the Octotrooper patrolling this Gusher, activate it, and ride it to its surface. Quickly take out the Twintacle Octotrooper at the top and destroy the crate below it to reveal this mission's Sunken Scroll. Use squid form to fall through this net platform, returning to the one below, and travel to the opposite area. Destroy the Octotrooper guarding it, activate the Gusher, and travel to its surface. Ink the Zapfish's shield until it bursts, and then walk up to the Zapfish to collect it and complete the mission. 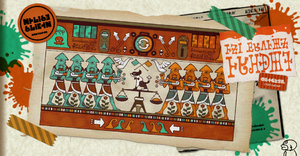 Location: The Sunken Scroll can be found after the final checkpoint.

Use the first Gusher you encounter and ride to its surface. Then, take the left Gusher to its top, and take the next left Gusher you see also to its top. Defeat the Twintacle Octotrooper and the crate immediately underneath it to reveal Sunken Scroll 4.