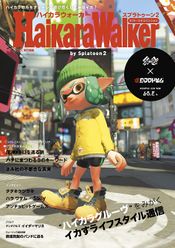 HaikaraWalker (ハイカラウォーカー Haikara Uōkā, "Inkopolis Walker"), also known in-game as Inkopolis Illustrated, is a book of official art from the Octo Expansion, released in Japan on 28 December 2018. It contains 272 pages and is modeled after a fashion magazine appearing in-game on the Deepsea Metro.[1]

The book contains various artworks and design documents from both the Octo Expansion and the main game, including two storyboard-style manga, details about fashion designer Toni Kensa, an interview with (fictional) graffiti artists, an interview with the developers about Squid Beatz 2, and information about bands such as Chirpy Chips and Squid Squad.[2]