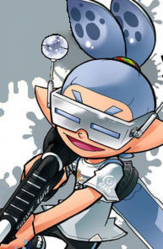 Hivemind is a character from the Splatoon manga who first appeared in Volume 13. He is on Team Order in the Final Splatfest, and stands in the way of Goggles retrieving Ammoses Shellendorf's long lost treasure.

Hivemind is a male Inkling. He has the Top-knot hairstyle and wears the Hivemind Antenna, Front Zip Vest, and Navy Enperrials. His weapon is the Kensa Charger. He appears to have some sort of mind control ability as seen in Chapter #52