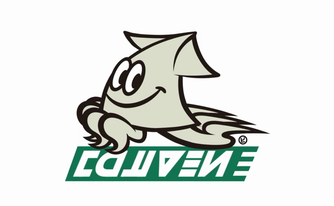 For the piece of Grizzco gear with this company's logo, see Squiddor Polo.

iShipIt is a shipping company introduced in Splatoon 2. It is the largest transport company in the world.[1]

The logo of iShipIt is a white, running, smiling squid with a white Inkling text (which reads "Idaten" when deciphered) on a green banner below it. In version 3.1.0 of Splatoon 2, the company was given an alternate logo with the squid recolored blue and the green banner recolored red. This version of the logo adds blue text above and off to the side of the red banner. Judging from the Squiddor Polo's name, the name of the squid in the company's logo might be "Squiddor".

iShipIt's name, logo, and shipping packages can be seen in various locations in Splatoon 2.

iShipIt's name is a play on "I ship it", which, while mainly referring to the company's function, is also a phrase commonly used among fans of a work of fiction to express approval for a hypothetical relationship between two characters.

Squiddor, the presumed name of iShipIt's mascot, seems to come from the name suffix -dor/-dore (from the Old Greek δῶρον), such as "Theodor" (gift of God) or "Isidore" (Gift of Isis). If this is the case, the company's mascot name would mean "Gift from a squid".