An Ink Cannon in Octo Canyon. 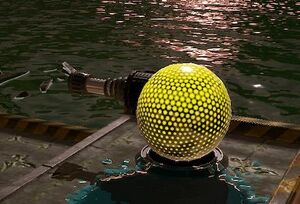 The other style of cannon, in Salmon Run Next Wave.

The Ink Cannon (sometimes known simply as a cannon) is a mechanic in the Splatoon series. It is a huge turret that appears in certain stages, primarily in the single-player modes, Octo Valley, Octo Canyon, and the Octo Expansion. A slightly different Ink Cannon also appears in Salmon Run and Salmon Run Next Wave, as well as in the Shifty Station stage Cannon Fire Pearl.

Ink Cannons fire missiles which can travel great distances and deal a large amount of damage. The damage does not seem to taper off with distance from the impact point, dealing the full amount over the entire splash range. The missiles are affected by gravity and have a limited range. Firing the cannon works the same as the main weapon, as it fires with

and has an aiming reticle. Ink Cannons typically do not use any of the ink from the player's ink tank. The view zooms in significantly when using an Ink Cannon, similar to using a scoped charger. There is also a short cooldown after shooting a missile before being able to launch another missile.

The Ink Cannon's appearance was slightly modified in Splatoon 2, with it looking like a checkpoint with a cannon and artillery shield. It functions identically to the first game.

The cannons in the Octo Expansion use the Octo Canyon design and function, having unlimited ink, but with the Kamabo Corporation logo branded on them.

Cannons return in Salmon Run Next Wave during Cohock Charge.