The Ink Vac is an upcoming special weapon in Splatoon 3. Its name was revealed three days after the gameplay of it in the release date trailer of Splatoon 3.

The Ink Vac is based on a diesel-powered backpack vacuum cleaner. The backpack consists of a white ink canister and a cyan vacuum engine below it. As the Ink Vac absorbs more enemy ink, the canister gets filled by glowing ink of the Ink Vac user's color and seems to shake more intensely. The engine has some control panels and a hose connecting it to a massive nozzle. The nozzle is cyan-and-black with two handles. The Dolphin logo can be seen on the canister and the nozzle. 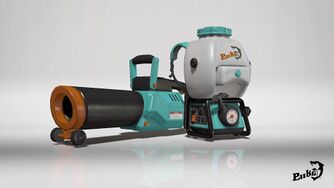 When deployed, the Ink Vac creates a vortex that sucks in enemy ink, which can be used to protect allies from it. Opponents caught within this vortex appear to be applied with a Toxic Mist-like effect, though it is uncertain whether it only slows them down or if it also makes them lose ink. Whenever the Ink Vac sucks ink, it creates distinctive sounds that can be heard by both teams, potentially cuing opponents to stop shooting at the vortex to prevent fueling the explosive shot at the end of the special. After a brief delay, at the end of the special's duration, the Ink Vac shoots out a projectile of ink that displays a radius upon impact (similar to the Splashdown) before exploding shortly afterwards, splatting opponents within the radius. The radius increases with more enemy ink sucked before shooting the explosive projectile.[1][2] As of the Release Date Revealed trailer, the Ink Vac appears to be a part of the Splat Charger's kit.