Hey I made a template for the little weapon icons that some of you guys have on your user pages. It's at User:Bzeep/Weapons, hopefully you'll find it a little easier than having to do it all manually. --Bzeep! talk 20:04, 12 December 2015 (UTC)

Hey, is anyone else having problems with images? Like uh, a 522 error from Cloudflare? Yeah I thought something was wrong with the whole site, but apparently it's just the... image host? Image server? Whatever it's called. Can't see full images or thumbnails or anything unless they're from before this started, I think. There's a couple thumbnails that show up, but not for anything new.

Anyone else getting this? What's it mean?

Everything should be fixed now, sorry about the problems. OS somehow got corrupted so rebuilt the image server. No files are stored on the server itself, it was just the web server, so there should have been no damage to any files. Please let me know if you notice any further issues. -- Prod (talk) 04:48, 21 December 2015 (UTC)

Stage Quotes (at the top of screen)

Could we possibly have a differentiation of quotes on the top of the stage pages, because they are only NOA as far as I can see. Please could you add NOE please. What does everyone else think?--Adster1005 (talk) 21:42, 21 December 2015 (UTC)

I think the stage quotes at the top is just flavour text for the page and really is of no consequence. (I'm not even sure why they're there!) If there was a particularly good NOE quote then we could use that instead. However I can't think of any pages that would benefit from using a NOE quote instead of an NOA quote.
Kjhf Talk Contribs 01:04, 24 December 2015 (UTC)

I see no problems. 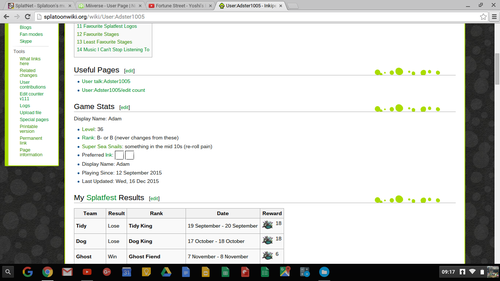 You can take the code from other templates and adapt it, however I've made a help page for it which you might find useful.
Kjhf Talk Contribs 17:16, 24 December 2015 (UTC)

I made some new barnsquids for weapons, what do you think?

I think we should start adding recommended abilities and recommended gear to each weapon article (examples here and here). Once that's done, we can compile all of these recommendations into a table on its own page. If you're interested in helping out (I know Azoth and NepetaLast have been working with me recently), leave a reply below or add your name to the 'Recommended Sections project on the Current Projects page!

Can we make a blog whenever?

Most of the time, the Girl and Boy challenges are more or less the same as the normal ones in terms of general strategy. I can't speak for the squid challenges, though.

Nyargleblargle (Contribs) 15:51, 30 December 2015 (UTC)
I say we do them. In addition to that, we need walkthroughs for every Octo Valley level. We're really lacking in that front. We should have a walkthrough section and then an Amiibo Challenges section that provides tips on how to complete each challenge for each mission. -

I have been wondering about hiw to get the Signature Prototypes and on how the members of staff have them. If you know on how to get one, please leave a comment below ^_^ User:Ikakizzu 9:34 (GMT) 31 Dec 2015

Since Super Mario Maker contains early weapon and gear designs (see my sandbox), would it be necessary to cover them on their respective pages (ex. early Inkstrike design covered in Inkstrike page)? -

Cool, thanks! I was thinking that the weapons/gear that have prerelease differences should have a "Prerelease" section that shows what it looks like before and comparing it to the design now. -

Eh, I guess you could, but there's usually only one previous iteration of the item, two at most. That's why the stuff with pre-release info right now just has it as a bullet in the trivia. But if you think there's enough information to make a new heading for it, I'd say go ahead. --Bzeep! talk 00:10, 2 January 2016 (UTC)

Inkling Of The Month

If things get tight like in this IOTM voting then we can just post a message to every active user about the voting, and how it's a tie/not enough people voted. I think that idea would work better. -

I'd say something like a week before voting ends would be best.

We've had issues with people not voting before- we actually have four active votes right now and very few people have submitted their opinions:

We're figuring out a dismissible notification system so we don't have to message each user individually, but for now, that might have to do. If you haven't voted on any of these already, please do so! -

Maybe an extension of the sitenotice?

We're actually eyeing this extension; Prod is taking a look. If it doesn't work out, we might go with something else. ~SuperHamster Talk 04:57, 3 January 2016 (UTC)

Hey, does anyone have good pictures of any of the EU/OC Splatfest Tees in-game? That part of the gallery's not quite.. up to par. The goal is to have front and back pictures at the same quality as the ones at the bottom of the JP section, but whatever you got's fine as long as it's better than what's there right now.

And if there's anything floating around that can fill in the gaps of the NA (e.g. Water Slides, Science) and JP sections (back views of the earlier ones), those are still needed, too! Or if you've got a higher quality version of anything already there. Don't be shy! 😉

I have experienced some missing or not yet made Splatfest Barnsquids. Hopefully you or probably i will fix the problem. Ikakizzu 9:06 (GMT), 3 January 2016

I have noticed that we still cannot make a nomination on the page: Inkling of the month, Kjhf, Shall I edit the page or is it still closed? Ikakizzu

There are a few ways of saving source and official graphics. Some graphics can be ripped directly from the game, others are provided directly from Nintendo as marketing materials. Is there a way as tagging a graphic as "unmodified" source or official? For example, all of the ability icons are provided directly from Nintendo in SVG format on SplatNet and I think it'd be cool if these were saved here in case Nintendo takes them down for whatever reason... — Preceding unsigned comment added by Squirty (talk • contribs) 00:46, 5 January 2016 (UTC)

Yeah, that's a neat idea! I could probably make some little template for different file sources. Just to make sure we're on the same page here:
That sound right?
--Bzeep! talk 02:48, 5 January 2016 (UTC)

Those do sound good. I think maybe some type of "Recreation" one as well might be good. For example, if someone recreates a brand logo in high res or vector file format, it should be tagged as an "Unofficial Recreation" or something. To me, this would be valuable in separating the source graphics from the very similar and higher quality, but not original, recreations. --Squirty (talk) 21:07, 5 January 2016 (UTC)

I have just recently opened the vote selection for Inkling of the Month. If this ok or not with you, Kjhf. Ikakizzu 19:33 6 January 2016 (GMT)

Barnsquids are just little things you put on your user page for doing certain stuff - a few of them are awarded by other people on the wiki, but most you can just kinda give yourself. They're like... stickers. You can see them all at Inkipedia:Barnsquids, feel free to use any that apply to you. Like, I was on Team Marshmallow, so I put the Team Marshmallow Barnsquid on my page. It's pretty simple, just use Template:Barnsquids. 👍 --Bzeep! talk 00:56, 7 January 2016 (UTC)

If you not have heard recently, there is a new Splatfest called Past vs Present, hope you can edit the Main Page now! Ikakizzu 20:57 8 January 2016 (GMT)

So I came up with a template on my talk page to identify to users which item special abilities are mutually exclusive with other ones (because they only occur on one kind of item). I added it to squid girl hat, cherry kicks, and green striped ls. lemme know what you think before I go splatting it everywhere. Guy jin (talk) 19:22, 17 January 2016 (UTC)

Hey that's a good idea! We could always use more info in the abilities section. It could use a bit of reworking, but it's a good thing to know with certain gear. Thanks man, I'll add it to other gear where it applies. 👌 --Bzeep! talk 19:36, 17 January 2016 (UTC)

on second thought, I added it to the sections on the abilities themselves, since it means fewer pages to edit and that's where people go looking for items with ability X anyway. --Guy jin (talk) 02:52, 19 January 2016 (UTC)

So for the recommended abilities and gear sections on every weapon, we would need to list the gear that has one the abilities equipped. That would be tedious... Maybe we could design a template for skmething that would be like, "All Gear with Ink Recovery Up" or something like that? Just so it would be less of a pain? --PeriwinklePanther32 (talk) 00:15, 23 January 2016 (UTC)

You didn't add | at the beginning of the line of Ninja

I find this a bit tacky and unprofessional TBH. Can we go back to simply calling them deletions?