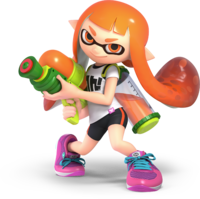 Inkling is a playable character in Super Smash Bros. Ultimate and the sole playable representative of the Splatoon series. She was the first new character confirmed for the game during its teaser trailer in the March 2018 Nintendo Direct and was explicitly confirmed during the game's official reveal at E3 2018 on 12 June 2018. Additionally, she has a unique ability among the cast to attack with ink, providing exclusive gameplay features.

Inkling's default appearance is that of an orange, light-skinned, female Inkling with the default "hippie" haircut, wearing the Fake Contacts, White Tee, and Pink Trainers, as a reference to the main Inkling design used in promotional material for Splatoon. Half of her alternate costumes are also female, while every other costume is male. The default male design is also based on promotional artwork - he is blue and light-skinned with the default "topknot" haircut, wearing the Fake Contacts, Zink Layered LS, and Purple Hi-Horses. Inkling defaults to using a Splatoon-design Splattershot but can use several other weapons in her attacks.

Inkling is a fittingly fast and slippery character to play as and is characterised by being able to cover ground effectively and attack quickly. As a middleweight, she has mostly decent mobility stats with noticeably fast running, air movement, and attack speed. This allows her to chain her moves together well and can rush down an opponent with quick combos before they can react. Her recovery is also impressive and she performs well off-stage, being able to use her fast speed and attacks to prevent opponents from recovering. Additionally, Inkling's ability to ink opponents is unique and allows her to deal additional damage and slow opponents down in a way that no other character can, at the cost of giving her a slight learning curve.

However, Inkling has some downsides as well. Despite being effective at dealing damage, she has difficulty getting KOs due to her most effective attacks being her slowest or most situational. Her grounded attacks are also less effective than her aerial ones, forcing her to grab opponents to start dealing more damage - something at odds with her ranged special attacks. Additionally, her recovery, although useful, is quite predictable and easy to defend against, while her ink needs to be constantly managed and refilled at key moments or else some of her best attacks drastically lose effectiveness or even become completely ineffective. Despite this, Inkling has no glaring weaknesses. Her generally middling stats with above-average speed and ink ability allow her to rack up damage incredibly well, even if she has some difficulty getting KOs. Overall, Inkling is viewed as a high-ranking character.

Inkling's victory poses are based off of their Shooter, Roller and Slosher victory animations from Splatoon. Both the male and female Inkling's have different animations for each one.

While playing as Pit on the standard form of the Palutena's Temple stage, performing a down taunt for a split second allows him to have a conversation with fellow Kid Icarus characters Palutena and Viridi about one of the other characters in the battle. This Easter egg, referencing the style of Kid Icarus: Uprising, features one conversation for each base game fighter, plus Piranha Plant. However, if Pit is hit during the taunting animation, the sequence will not work again for the rest of the match.

The Palutena's Guidance conversation for Inkling is listed below.

Pit: Uh, are you guys seeing this? This girl/guy can turn herself/himself into an octopus!

Palutena: A squid, actually. This curious lifeform is an Inkling. They're squids who evolved to shapeshift into human form.

Pit: Whoa, whoa, whoa! Wait a second! If I'm fighting against an Inkling, then... WHAT YEAR IS IT RIGHT NOW?!

Palutena: Focus, Pit. If an Inkling hits you with an ink attack, you'll take extra damage until the ink evaporates. However, Inklings can't use ink attacks if their Ink Tank is empty. That's the time to strike!