The Killer Wail 5.1 is an upcoming special weapon in Splatoon 3. 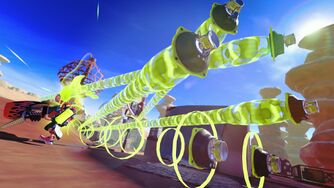 When activated, six speakers spawn in a ring formation which briefly follows the user. The speakers then fire wall-piercing beams, similar to the Sting Ray and the original Killer Wail. The speakers do not start firing at the same time and tend to target slowly towards the user's opponents autonomously. Brief trailer appearances show lasers start firing in pairs, from top to bottom, in quick succession.[1][2] Each pair of lasers can initiate at different angles suggesting multiple opponents can be simultaneously targeted, however all six lasers can target one opponent. The mechanism behind this is currently unknown.

Most statistical information, such as duration and base damage, are currently unknown. As of the Release Date Revealed, it is part of the Range Blaster, Sloshing Machine, .52 Gal, and Tri-Stringer's set.

The Killer Wail 5.1 is also confirmed to appear in Salmon Run Next Wave. Similar to the Sting Ray, it can defeat a Flyfish without the use of Splat Bombs.