For Splatoon's version updates, see List of updates in Splatoon.

Post-release content is additional post-launch content released for Splatoon. Nintendo frequently released new weapons, stages, modes, features, and gear up until 22 January 2016. Usually, Nintendo announced the release date of upcoming content via their social media accounts. An Inkopolis News announcement introduces the new content when it has been released. Interestingly, most additional content was already in Splatoon, waiting to be unlocked by Nintendo. There have been 52 new weapons (counting the Rainmaker), 11 new stages and 3 new modes released. The content updates finished with the release of Sheldon's Picks Volume 2 on 8 June 2016. 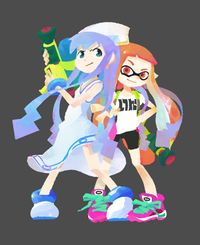 On August 5, Splatoon x Squid Girl collaboration content was released. Revealed on Masahiro Anbe's official Twitter, it features costumes from the manga/anime. Official art was also released with the tweet, and the following issue of Weekly Shōnen Champion also featured an ad to further confirm the crossover. Nintendo of America confirmed on Twitter before the update that the Squid Girl content would be coming to America. 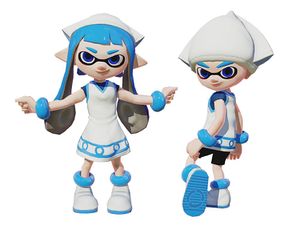 In their May 20 issue, Famitsu offered a Splatoon costume design submission contest, with the winning entry being added to the game. The selected winner was The Festival Octopus Chef. The gear was added alongside the aforementioned Squid Girl gear in the August 5 update. 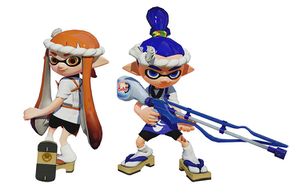 Main article: References to Splatoon in other media

The costumes for Mii Gunner

Those who preordered Splatoon at GameStop received a free code for these costumes, though they couldn't be obtained until the official release.

The Splatoon-themed content includes a full outfit for Mii Fighters and a Trophy of an Inkling.