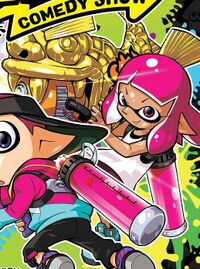 Maika is one of the main characters in Splatoon: Squid Kids Comedy Show, alongside Hit.

Maika bears a strong resemblance to one of the Inkling girls from the Splatoon 2 promotional art, brandishing the Splat Dualies and wearing the Fake Contacts, Slash King Tank, and the Mint Dakroniks, as well as having the "Haircut" hairstyle. She usually has pink hair and eyes. The thin black bracelet that comes with her Slash King Tank also appears on her squid form.

Similar to Headphones from the Splatoon manga by Sankichi Hinodeya, she is the 'straight man' to Hit's funny man attitude. She usually scolds him in this regard. She is athletic and very flexible. While Hit is considered the ridiculous one, Maika has her moments, and once was seen misfiring several times with the dualies.