From Inkipedia, the Splatoon wiki
(Redirected from MarioKart 8 Deluxe)
Jump to navigation Jump to search 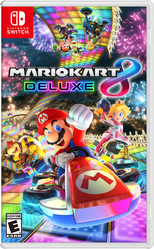 The box for the game; a female Inkling is featured towards the top.

Mario Kart 8 Deluxe introduces Splatoon characters and other references to the Mario Kart series. Both male and female Inklings are introduced as playable characters, with three different variants each. A new battle mode course is introduced named Urchin Underpass based on the original Urchin Underpass stage from Splatoon, as well as two Splatoon-themed ATVs, the Splat Buggy and the Inkstriker (heavily based on the Inkstrike). A new Inkling-themed amiibo costume unlocked by placing any Splatoon amiibo is also added.

The selectable costume variants for the Inklings are as follows: