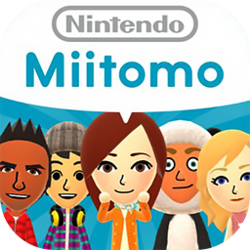 The app icon for Miitomo

Miitomo was a social networking mobile application developed by Nintendo for Android and iOS and released worldwide in March 2016. The app allowed users to communicate with friends by answering questions and sharing images. The game also featured a "Miitomo Drop" minigame, in which players could "drop" Miis for a chance to win in-game clothing items or candy. Several promotional items based on Splatoon were made available through official promotions while the Fancy Party vs. Costume Party Splatfest was held in May 2016 to promote Miitomo.

On 20 April 2016, Nintendo started a Splatoon retweet event. Several Tweets[2][3] across Nintendo's Twitter accounts were made announcing that if they were retweeted 10,000 times, Miitomo players would receive an in-game Inkling boy wig.[4] If 20,000 retweets were made, players would also receive an Inkling girl wig.[4]

From 27 April to 29 May 2016, two Splatoon-themed Miitomo Drop stages are available, allowing users to obtain Splatoon-themed clothing items.[4] Also during this time period, players could redeem Miitomo coins for squid pin accessories, or redeem My Nintendo Platinum Points for ink tanks.[4] Both were available in various colors.[4]

On 5 July 2016, the original Splatoon content was made available again (until 14 July 2016 for the Miitomo Drop stages and 15 July 2016 for all other content) and new shirts based on the Callie and Marie Splatfest clothing were added to the Miitomo shop.