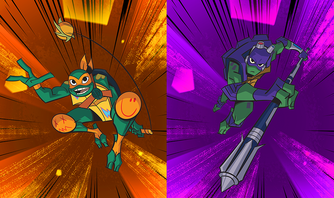 Mikey vs. Donnie was a Splatfest event in Splatoon 2. It was held in North America, Oceania, and Europe. It was announced on 9 May 2018. The results were given on 14 May 2018.

Mikey vs. Donnie was the second round in a three-round tournament. The theme of the tournament was the four main characters of the television show Rise of the Teenage Mutant Ninja Turtles: Leonardo ("Leo"), Raphael ("Raph"), Donatello ("Donnie"), and Michelangelo ("Mikey"). The winner of this round, Donnie, went on to face off against the first round's winner in the final round.

While there are normally several weeks between Splatfest events, the Rise of the Teenage Mutant Ninja Turtles tournament's events were only one week apart.

The full name of each choice was "MIKEY" and "DONNIE". The team name portion of Splatfest titles was "Mikey" and "Donnie".