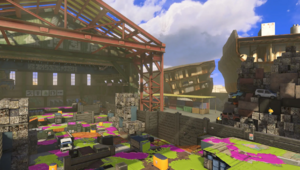 Mincemeat Metalworks is a multiplayer stage in Splatoon 3. It is a metalwork in Splatlands in what used to be an ocean that evaporated.

The Splat Zone makes up most of the middle, in between the two raised areas and underneath the grated middle.

The Rainmaker starts at the center of the stage. The checkpoints are located after entering the opponents' base through the grated bridge, or to the right of the starting position. The goal is located on the first drop from the spawn area. A ramp is added to the right to allow access to the pedestal.

The Clam Basket is located on some grates on the first drop down from spawn, with a bump being added to help the player access it from below.