From Inkipedia, the Splatoon wiki
(Redirected from Mini Zapfish)
Jump to navigation Jump to search 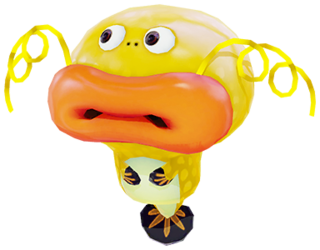 Zapfish (Japanese: デンチナマズ Denchi Namazu) are creatures that appear in Splatoon and Splatoon 2's Hero Modes, Octo Valley and Octo Canyon. The player must rescue one at the end of every level in order to proceed in the story. To take the Zapfish, the player must burst its shield with ink like the Rainmaker's shield. Then they must touch it and the screen and music will change to say that they have passed the level.

There are different types of Zapfish in the game: normal Zapfish are small, approximately the size of an Inkling's head; the more powerful and much larger Great Zapfish provides enough electricity to power Inkopolis. Normal Zapfish are held captive by bosses in each world, while the Great Zapfish is held by the final boss, DJ Octavio.

Zapfish, electric catfish, are the main power source of Inkopolis. Through an Inkopolis News broadcast at the start of both Splatoon and Splatoon 2, the player learns that the Great Zapfish has been stolen and taken to Octo Valley and Octo Canyon respectively, both places being a hidden underground base used by the Octarians. The player is guided by Cap'n Cuttlefish or Marie and must rescue all the Zapfish in order to restore Inkopolis' power supply. A Zapfish is found at the end of every level, enclosed in a glowing sphere of electricity and sitting on a light bulb-esque pedestal. The player must shoot the sphere with ink until it bursts, releasing the Zapfish. If it is not grabbed after some seconds, a new bubble will form around it.

There is a doll version of a Zapfish that replaces the normal Zapfish when completing a mission that had already been cleared. It is made out of wool, has googly eyes and some stitches patched, and it wears a blue cap made from wool, resembling Cap'n Cuttlefish's Legendary Cap which the real Zapfish do not wear. The animation for obtaining the Zapfish also changes, having Agent 3 and Agent 4 holding the doll differently.

Zapfish appear to be a cross between a small fish and a light bulb's filament. They have a large head with two small eyes, two nostrils, and a pair of orange lips. Below the head is a smaller, yellow body.

Mini Zapfish only appear in Octo Canyon inside Octoling missions. There are a total of eight Mini Zapfish scattered across the map in each mission and it is Agent 4's job to collect all of them. It is stated by Marie that all eight Mini Zapfish combined have the power output of one normal Zapfish.

In the Octo Expansion, Zapfish are replaced by a different goal, which has a thin, silver, pencil-like design. They are the way for Agent 8 to complete levels that task them to get to the goal. They function the same way as a Zapfish, with bombs exploding instantly if they touch it.

Similarly, data points replace Mini Zapfish, which appear in groups of eight. These only appear in three levels, being Bodacious Rotation Station E11, Cubular Station F10 and Diaphragm Phase. The Diaphragm Phase also features an object called the Energy Core which looks like a red spherical Zapfish. HaikaraWalker confirms that it is a Zapfish egg.