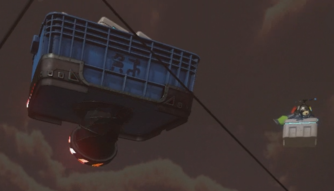 For the Known Occurrence, see The Mothership.

Motherships are Boss Salmonids that appear in Salmon Run in Splatoon 2.

Flying high above the map far enough to prevent most weapons from hitting them, Motherships carry crates full of Salmonids, which are dropped off by smaller flying Salmonids accompanying it called Chinooks. Motherships can also use a vacuum on the Egg Basket to suck up any Golden Eggs inside. Mr. Grizz warns players whenever a Mothership is preparing its vacuum and when it has almost reached the Egg Basket. Destroying the crates before they open will prevent them from deploying their cargo, and the Chinooks themselves can also be defeated before they can drop the crates. More importantly, they will also drop Golden Eggs when defeated. Attacking the Mothership when it reaches the Egg Basket will force it to retreat. Attacking it with the

Inkjet, or other weapons with a range long enough to hit the crates it carries will also make it drop large quantities of Golden Eggs. While the Mothership is sucking up Golden Eggs from the Egg Basket, players will be unable to deposit Golden Eggs until they push it back.

Like Grillers, Motherships only show up in a special wave. If Mr. Grizz talks about Motherships at the beginning of a wave, that means the players are in the wave. This special wave consists of only a Mothership and its Chinook escorts.