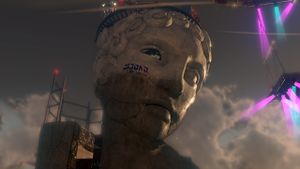 The NILS Statue rising from the ocean.

The NILS Statue is a giant weaponized statue and the center of Kamabo Co.'s facilities.[1] It has a distinctly human form, despite humanity having been wiped out thousand of years before Splatoon's events take place.

Commander Tartar, an AI created 12,000 years ago by a human professor, attempts to use the statue as a weapon to destroy Inkopolis, Inkling civilization, and life across the world.

The NILS Statue is the location of Turf War, the final mission of the Octo Expansion. Agent 8 must completely cover the statue in ink using Marina's hyperbombs to prevent it from charging a large cannon in its mouth. When they succeed, the cannon fires anyway, and Pearl uses the Princess Cannon to intercept its beam and destroy the statue, sinking it. If Agent 8 fails to ink the entire surface or falls into the ocean at any time during the mission, the NILS Statue destroys Inkopolis and players are given the choice to try again or skip the mission.

The NILS Statue appears in the background of MC.Princess Diaries, the final Shifty Station used for Chaos vs. Order. Here, it is revealed that the statue, now lacking its ink, has partially sunk into the sea, where various jellyfish study it and its destroyed cannon.

A destroyed NILS Statue can be seen from Hammerhead Bridge, still partially submerged. However, the researching jellyfish who once were there are now gone.