From Inkipedia, the Splatoon wiki
(Redirected from Nintendo Switch Online)
Jump to navigation Jump to search 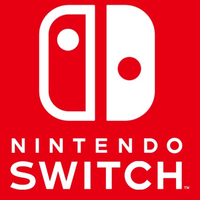 For other pages associated with switches, see Switch.

The Nintendo Switch consists of a tablet-like console with a 720p display that can be placed into a docking station. When the system is in the dock, game footage is displayed on the TV screen at up to 1080p HD. When the console is detached from the dock, game footage is displayed on the console's screen. The two Joy-Con controllers, generally connected to the sides of the system for handheld play, can be removed and used either as separate controllers horizontally (similar to SNES controllers), used together as a single controller (similar to Wii Remotes), or docked into a grip to give a more traditional experience. A traditional controller, called the Nintendo Switch Pro Controller, is also available. This controller has the same set-up as the Wii U Pro Controller, except for the second analog stick being set below the face buttons. This controller is compatible with Splatoon 2. As of the system's Version 10.0.0 firmware update, the ability to change button mapping for each controller was introduced.

The Nintendo Switch Lite features its controls integrated into a single, smaller device. Therefore, there are no detachable Joy-Con and a traditional control pad, rather than separated directional buttons. The unit is smaller and lighter than the original, with a slightly smaller screen, and some removed features including HD Rumble and an infrared camera. The system cannot dock to a TV but additional Joy-Con can be connected for additional features.

The console, like the Nintendo DS and Nintendo 3DS, uses ROM Game Card cartridges similar to the SD Card format, making it the first home gaming device to not utilize optical discs since the Nintendo 64.

Players can also locally connect up to eight Nintendo Switch consoles to each other for wireless play. Splatoon 2 uniquely allows up to ten systems to connect - eight playing the game and two spectating.

Nintendo Switch Online encompasses both the online service itself and the Nintendo Switch Online App, used for SplatNet 2 and Nintendo's online party system. The service also offers cloud saves, though not all games support this feature such as Splatoon 2, meaning that there is no legitimate way to backup Splatoon 2 as opposed to the first game, which could be saved to an external USB storage device.

Splatoon 2 players who sign up to the service and choose the twelve-month or family plan can receive a special set of exclusive in-game gear, the Online Jersey and the Online Squidkid V shoes.[8] Shortly after obtaining the membership, an email is sent to the registered address (or the admin account if using a family plan), containing a code (eight if using a family plan) to redeem in the eShop, in which a box will appear in the middle of the Square containing the items.

Check this article for additional references.