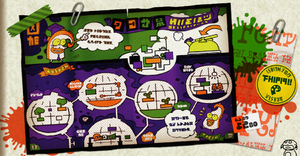 Octarian domes are the main locations of the Octo Valley, Octo Canyon and the Crater missions, as well as the location of the Shifty Stations.

When the Octarians lost the Great Turf War, they were left to reside in a few locations like Octo Valley and Octo Canyon. These areas consisted of several underground domes that were filled with ancient human structures. The Octarians used these ancient artifacts to create most of the obstacles and mechanics seen in the games.

Sunken Scroll 6 showing a newspaper article on the domes.

During the events of Splatoon, the domes in Octo Valley were deteriorating due to a loss of energy causing most to be uninhabitable. DJ Octavio, the Octarians' leader, then decided to steal the Great Zapfish from Inkopolis for his own Octoweapon and used all the other Zapfish to power the domes.

Sunken Scroll 23 showing a hand-drawn guide on the decorated domes.

In Splatoon 2, Callie was kidnapped and brainwashed by Octavio. According to Sunken Scroll 23, Callie was put in charge of redecorating the domes to look more upbeat. This is why several banners, stickers, and balloons can be seen in all of the domes. It is also implied that these are the domes that the Octarians moved to after the constant deterioration of the Octo Valley domes.

The Octarian domes are caves with several large television screens broadcasting the outside sky. Each dome includes a giant lamp that brings light into the entire cavern. They also contain several other floating objects like boulders, buildings, and railways.

While the domes in Octo Valley only serve as battlegrounds for protecting the Zapfish, the ones in Octo Canyon are also shown to have many other varieties like cities and resorts. The "city domes" have several suction cup-like buildings scattered along the bottom of the area. The sky panels here also have a hexagonal shape and are neatly placed, unlike the other domes. The "resort domes" are filled with water at the bottom of the cave along with a few islands along the sides. The sky panels also broadcast more tropical scenery. The third type of dome also appears to have a more basic cave design, though it does appear to have several roads going across the bottom and top of the dome. Like the resort type, they also are filled with water at the bottom of the cavern.

The final fight with DJ Octavio in Octo Canyon also takes place in his own "concert dome". This dome has several seats along the walls of the cave for Octarians to view the battle. There are also a few additional panels that broadcast close-ups of Callie and Octavio during the battle. This dome also seems to be filled with a lake of purple ink instead of water.