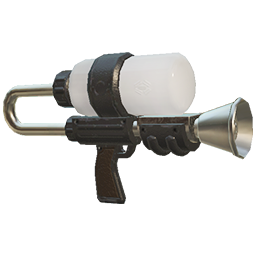 The Octo Shot's ink tank is a large cylindrical tank with a black screw cap that rests on top of the main parts of the gun with a thick, plastic, black band wrapped around it, connecting the ink tank to the gun. From the top of the screw cap, a large wide tube bends in a U-turn fashion connecting the ink to the barrel of the Octo Shot, which resembles a pure black and miniature version of the ink tank, complete with a black screw cap. Below the barrel is a large handle with a small trigger that is held within one hand. Connecting on the remaining side of the barrel is a grip that is used with the other hand to grasp when firing. The grip is a silver-colored semi-cylinder with a black semi-cylinder coating the outside, complete with finger holds for grip. Connecting to the forward-facing side of the grip is a funnel-shaped silver nozzle. The default appearance and Octo Shot thumbnails portray the ink color to be a dark purple, resembling Callie's shade of ink. 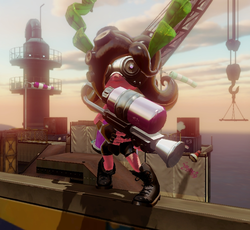 In Splatoon, this weapon is called the Octoshot and is the only main weapon used by Octolings in Octo Valley.

The Octoshot Replica is a weapon that can be obtained as a reward from Judd for reaching level 40. It is visually identical to the Octoshot, but functionally, it is identical to the Tentatek Splattershot, sharing the same stats and loadout, with Suction Bombs as its sub weapon and the Inkzooka as its special weapon.

In Octo Canyon in Splatoon 2, Octolings again use the Octo Shot as a main weapon. However, there are some that use different weapons of other classes, all of which are red versions of the hero weapons, such as the Hero Roller and the Hero Blaster.

In the Octo Expansion, the Sanitized Octolings use the Octo Shot and red variants of the hero weapons of other weapon classes like in Octo Canyon, though there are now more that they can use, such as the Hero Brella and the Herobrush. Elite Octolings with the Octo Shot use the Inkjet as their special.

Although it is intended for the player to be forced to collect the Octo Shot in the Villi Phase due to a wall that the player must ink and climb followed by a Splat-Switch that must be activated, there is an exploit that makes it possible to avoid obtaining it by inking the wall with Splat Bombs and climbing it that way (as it is possible to dodge the Octoseeker that usually deters the player from doing this), then throwing Splat Bombs at a precise point on a wall next to the Splat-Switch in order to activate it using the ink from the explosions. However, when the player moves on to the Belly Phase, they will be equipped with the Octo Shot for the rest of the escape sequence like usual regardless of whether they actually collected it.

The Octo Shot returns in Splatoon 3 as a main weapon enemy Octolings can use in Return of the Mammalians, though there are again other main weapons they can use instead.