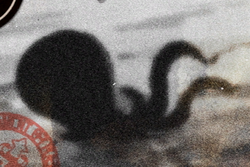 A photograph from Sunken Scroll 13.

A research paper showing a schematic for the creation of the Octostomp. From Sunken Scroll 24.

The Octobosses, known in Splatoon as the Great Octoweapons, are large opponents, mostly mechanical robots piloted by Octarian forces. They serve as bosses in the first two story campaigns.

According to the thirteenth Sunken Scroll in Splatoon, the Great Octoweapons were deployed by the Octarians during the Great Turf War 100 years ago. However, when their victory seemed certain, a plug was pulled from its socket, resulting in the Inklings' victory.

During the Octo Valley campaign, the Octarians revive the Great Octoweapons using the stolen Zapfish, however Agent 3 defeated them one by one, before capturing DJ Octavio.

In Splatoon 2, after Agent 4 beats the Octo Oven, Marie says she did not expect the Octarians to have fully operational Octobosses at their disposal.

According to Sunken Scroll 24, the Octobosses have sentient tentacles implanted in their machines as a means of control. In the sketch, the complex chemical structure for the Octostomp weaponry can be seen.

During the Octo Canyon campaign, the Octarians revive the Octobosses using the stolen Zapfish. However, Agent 4 defeats them one by one before capturing DJ Octavio.

During the Octo Expansion campaign, the Octobosses are revived. However, Agent 8 defeats them one by one before beating Commander Tartar.

The bosses can be encountered in the following missions or stations: