Octolings Ahoy! is the twenty-first mission of Splatoon 2's single player mode Octo Canyon and is the third mission to encounter a group of Octolings. It takes place on a modified form of Moray Towers.

Unfurl the Inkfurlers at the end of the path at the center of the far edge of the map. Destroy the two crates on the other side, and the kettle is behind the crates.

Use the roller, and head straight down the towers while staying on the ground. Then, take care of the 2 Octosnipers. Once that is done, start heading up the enemy side, where you will find a cannon. Use it to scope out your surroundings, and ink turf. Then, get the last 7 mini zapfish. 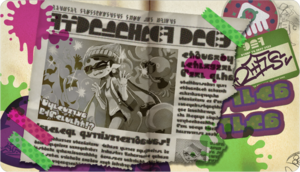 Location: Get to the enemy's side of the map and climb up the slope with the grates sticking out of it. Drop onto the second grate, and walk around the corner to get the Sunken Scroll.

Location: The Sardinium can be found in a crate right in front of the Octoling spawn point.

Octolings Ahoy has 4 pieces of armor to collect.

Armor 1 Location: Drop down and forward from the spawn point to where the closest Mini Zapfish is. To the right beside the boxes lays the armor.

Armor 2 Location: From the spawn point's side down below to the right from the center, there gentle slope leading up the tower, where the armor is situated before the first turn.

Armor 3 Location: There is a gentle slope that leads up to the other side of the map, where an Octosniper resides. Beside it lays the armor.

Armor 4 Location: The second highest gentle slop leading up to the other side of the map has some crates, where a small one sitting on top a big crate contains the armor.

Sting Ray 1 Location: Down below to the lowest level in the middle of the map and off to the far right (as seen from the spawn-point's perspective), there is an armored crate at the edge of the map besides the lower end of two ramps. This crate contains the Sting Ray.

Sting Ray 2 Location: On the highest floor near the Octoling spawn point, there is a collection of smaller crates bundled together. One of these crates contains the Sting Ray.